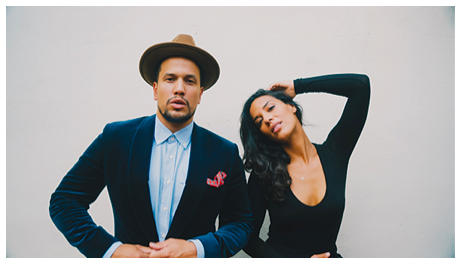 Acclaimed husband and wife band JOHNNYSWIM are confirmed to perform as part of the Macy’s Thanksgiving Day Parade, which is celebrating 90 years as the official start to the holiday season. The parade will be broadcast live on NBC and feature additional performances from the likes of Kelsea Ballerini, Tony Bennett, Aloe Blacc, De La Soul, Fitz & the Tantrums, Sarah McLachlan, Regina Spektor and more.

JOHNNYSWIM continues to celebrate their latest album, Georgica Pond, which debuted at #13 on Billboard’s Top Current Album Chart, #35 on the Billboard Top 200, #4 on iTunes’ Top Albums and #1 on iTunes’ Singer-Songwriter charts this week.

“Their sparkly pop songs exude L.A. sleekness, but they’d easily translate to country radio with the application of a little twang…and the lyrics frequently touch on the elation, complication and lifelong work inherent in love, devotion and family.”—NPR Music

“Amanda Sudano and Abner Ramirez pull and push themselves with their fans into the depths of that realm, creating a critical space for honesty, loss, and love that can be experienced, heard, and understood. The duo’s sophomore release, Georgica Pond, is the pinnacle of all those discoveries: that beauty is imperfect, that pain deserves to be felt, and that there is always room for hope in the smallest of places.”—NYLON

“There’s nothing quite like the warmth of Amanda Sudano’s voice, especially when there’s a slight nip in the air in the middle of October…If you’re in a place where you need some reassurance and hope, JOHNNYSWIM has your back.”—Baeble Music

“Whether they’re conveying the wonderful highs or the bittersweet lows of relationships, it’s enough to elicit a flood of relatability and understanding.”—All Music

In addition, JOHNNYSWIM will appear on the Food Network’s “Ayesha’s Homemade” on November 5. They also performed their single “Let It Matter” on “TODAY,” played new songs for The New York Times’ Facebook Live series and spoke with AOL Build about the album.

JOHNNYSWIM is currently on a national headlining tour (1000+ cap rooms) with many dates already sold out, including Nashville, Chicago, Boston and New York City. They will also appear at Live In The Vineyard on the main stage in November and confirmed the second leg of the Let It Matter Tour this March. See below for details.

Georgica Pond was produced by JOHNNYSWIM’s Abner Ramirez and recorded at the couple’s home studio in Los Angeles, with bass and drum parts added at the Castle in Nashville. JOHNNYSWIM teamed up with a few different songwriters and collaborators including longtime collaborator Britten Newbill, violinist/composer Anton Patzner, Nashville-based songwriters Natalie Hemby and Chris DeStefano, as well as country music icon Vince Gill, to create a listening experience that spans a range of tones and emotions.

Abner Ramirez and Amanda Sudano Ramirez make up JOHNNYSWIM. The pair met in Nashville in 2005, instituting a songwriting partnership not long afterward. They clicked together musically and personally, beginning a romantic relationship along with their creative connection. The couple married in 2009 and relocated to Los Angeles. In addition to their 2014 debut full-length Diamonds, which sold over 50,000 copies and has almost 30 million streams, they’ve released three EPs, as well as a Christmas EP and a live album. They’ve performed on television shows including VH1’s “You Oughta Know Concert,” “The Tonight Show starring Jay Leno,” “Late Show with David Letterman,” “The Late Late Show with Craig Ferguson,” “Today Show,” “Live with Kelly & Michael” and their song “Home” remains the theme for HGTV’s “Fixer Upper.”