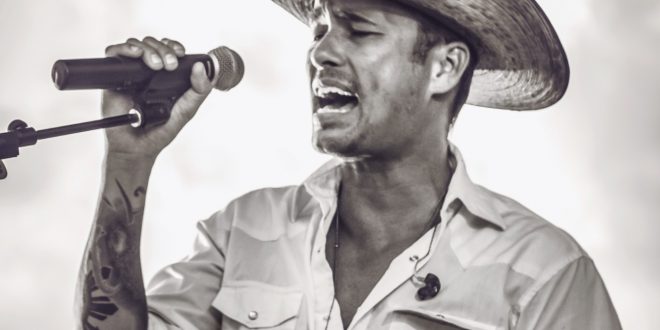 Noe  Palma has been a native of the Kansas City area his entire life and if you’re a country music fan from this area, then you likely know his name. He has been a local favorite for many years with a very loyal fan base. However, with a very unique and unforgettable voice, I am certain that Noe Palma will be a name the rest of the world will also soon know!

ME: When did you start getting into music? Did you grow up in a musical family?

NOE: Yes, I did. Both of my parents sang and my dad played guitar. My mom is from Oklahoma and my dad is from the Philippines and they also had musical families so there was always music in the background at the house. Anything from Kenny Rogers to Stevie Wonder; you name it! We listened to it all. When I first started singing and really trying to do better at it, I was singing all Michael Jackson songs. Of course, I had a different voice back then. And I didn’t really pick up a guitar until I was about 17. Right at the time I was a senior in high school… that’s when I started playing. I pushed it even harder in college. We’d always have big dorm parties and I’d sit around playing for everybody and I thought this might be fun to do for a career. So when I graduated from college I came home and tried out for a band. I got beat out by another artist here in town. He was more of the George Strait and I was more of the Travis Tritt type of person so they went with the Strait type. After that, I formed The Broken Cowboys before eventually just going out on my own.

ME: I remember The Broken Cowboys. Did you have a record deal with them?

NOE: I had a management deal with Scott Siman of RPM management who also manages Tim McGraw. For about a year, Scott, flew me in once a month to write. One of the guys that I work with was friends Randall Chowning of Ozark Mountain Daredevils, if you remember that band from a long time ago. They were getting up there with Lynard Skynard and Marshall Tucker Band. His wife is Scott Siman’s sister so word traveled that way. Scott heard us but he basically dismantled us as a band. It put me in a really tough position because we were doing really well as The Broken Cowboys at the time. We were basically the opening act at every country concert down at The Beaumont Club at that time. At that time Tim McGraw was really really hot and I thought I was never going to get another chance. So I talked to the band and decided to go for it. You just don’t get another chance like that. So this went on for about year and then Scott realized I was sort of a work in progress so I pushed to the back of the list and he kept finding other guys that were more of a package deal and ready to go. Guys he didn’t really need to grow. So I kept getting pushed back even further so I just came back home and  just decided to use myself instead of being a “band” per say. I have had my core guy, my bass player, Chris Thompson. He has been with me for 10 years at least.

ME: Did you write the songs on the EP?

NOE: I did on my first album, but no, I did not write any of the songs on this EP. I haven’t written in a long time. These songs were coming in to me so fast and they were so good!  And I thought “why deprive someone else’s talent when they can do it much better than I can!” I wish I could write that well! I used to write a lot and at one point, I had over 200 songs. And actually “I’ll Be Your Whiskey” has been recorded four times. From what I know and the background research that I’ve seen about the song, nobody has put it out on the radio.. I love the song; it’s a great story.

BRIAN (Manager): He’s playing so many shows right now, but he is going to Nashville and building connections with publishing companies and a lot of the top tier songwriters as well. Guys  like Jason Matthews, Dallas Davidson, Thomas Rhett, Brett James, and several others. In building this relationship with that publishing company, they will pitch songs that they feel are a good fit in Noe’s direction.

NOE: We’ve been lucky there. For some reason they’ve been nice to me even though they don’t know me from Adam.

NOE: I can’t sing a song I don’t like just because it’s a popular song.

ME: Do you ever play in Nashville when you’re there?

NOE:  I just sit in for a couple of songs every once in a while at the bars that I go visit. I usually go to the songwriter’s nights and introduce myself there. That’s where the important stuff is going on and where music is being pitched.

ME: Are there any labels interested? Any record deal talk going on?

BRIAN: Yes, there are a couple that are in the works but we can’t say anything about them just yet.

NOE: There are a lot of doors open. The more that we can get in the spotlight, on the internet, the more things that are being said, the more traffic there is… that all helps us out. Right now we’re on local radio here, itunes, amazon, spotify, pandora, google music and we’re working on Sirius

ME: Do you know what the next single will be?

NOE: It’s between “Swerve” and “She’s Wearing My Hat”. “Swerve” is a good, get you up out of your seat kind of song. We’re going two different directions. “I’ll Be Your Whiskey” is a great power ballad. With “She’s Wearing My Hat”, it’s more straight forward country and then the rocking side of me with “Swerve”.

ME: You’ve been a Kansas City firefighter for over 15 years as well. How do you balance your busy show schedule with firefighting?

ME: Do you have an idea on when the rest of the album will be out?

NOE: We want to finish the rest of the album this fall. That’s if we find the right songs. Songs are getting shipped to me via email and stuff like that right now. I took a different process when building the album this time. It seems like when labels put out an album, they focus on what can or maybe can be a single then just fill in the rest. I want every single song on my album to possibly be a single and good enough to put them all on repeat. I hate wasting an album, especially when it’s coming out of my pocket, or his pocket (pointing to manager), or somebody that’s investing in it. I think it’s just a waste of time. I don’t want to cut a song just to fill up space. That’s how I’m approaching it so I’m taking my time on this one. BIG TIME!

And also make sure to download his single “I’ll Be Your Whiskey”and latest EP!

Passionate about my son, music, and photography. I fell in love with live music in 1988, at the age of 5, when I saw Michael Jackson. My very first (of many) concerts! Photography came a little later, but when I put the two together...it's a feeling I cannot put into words! I hope that people are able to feel the fun and energy from the artists on stage, through my work!
@downmemorylane7
Previous Death Koolaid Releases Official Video For Second Single Off ‘Vol. 2’
Next Gallery: Breaking Benjamin at PNC Bank Arts Center in Holmdel, NJ 07.31.16