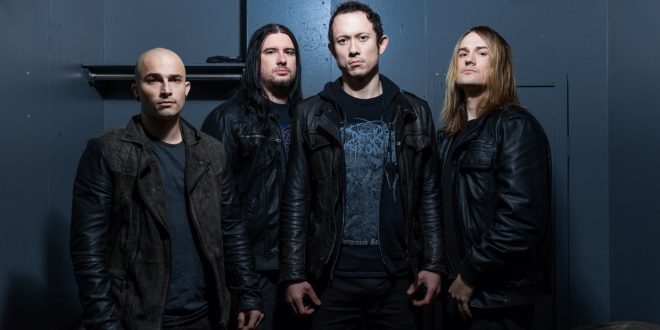 Trivium frontman Matt Heafy commented on the band’s excitement to return stateside exclaiming, “America! We’re coming back to party with all of you. This year has already seen countless cities in numerous countries, and now is the time to bring it back to our home country with our brothers and sisters of metal.We are beyond excited to have one of our favorite bands on the planet, Sabaton on the bill; and we are absolutely stoked to have the incredible Huntress out with us as well. We will be bringing you a show to remember; playing all your favorite tunes off your favorite records.”

Sabaton also remarked on the upcoming tour stating, “On the HEROES tour we came to North America three times and now it’s time to return. This time we will do it with our brand new album THE LAST STAND which will hit stores on August 19th.  This means that fans in North America will be able to enjoy the new songs before anyone else.  We are joining the great band Trivium for the full run and are sure that fans who come to see us will have a great evening!”

Trivium recently unveiled an official live video for their single “Dead And Gone” taken from their acclaimed new LP SILENCE IN THE SNOW. The clip, which was directed by Strati Hovartos and shot during the Trivium’s performance this year at Rock on the Range, is streaming now on Trivium’s official YouTube channel. “Dead And Gone” follows the Trivium’s breakthrough single, “Until The World Goes Cold,” which cracked the Top 10 at Active Rock Radio earlier this year marking Trivium’s first Top 10 at the format, while the official music video for “Until The World Goes Cold” has earned over 6.3 Million views.

Produced by Michael “Elvis” Baskette (Slash, Alter Bridge, The Amity Affliction) and mixed by Josh Wilbur (Gojira, Lamb of God), Trivium’s seventh studio album, made a stunning impact, arriving at #3 on Billboard’s “Hard Rock Albums” chart and #19 on the overall Billboard 200 marking Trivium’s third consecutive Top 20 debut. Hailed by Alternative Press as the “the purest metal of the year,” SILENCE IN THE SNOW stands as a long gestating creative milestone for the acclaimed band.  The collection had its genesis moment back in 2007 and was directly influenced by the time Trivium spent touring alongside the legendary Heaven & Hell that year.  Ultimately, it would take eight years before they felt equipped to tackle the challenging work of weaving their classic influences into a modern record. Fueled by the inspiration of true classic metal – spanning Black Sabbath and Rainbow, Iron Maiden and Judas Priest,  Pantera and Slayer, Megadeth and Metallica – Trivium challenged themselves to attain similar levels of greatness, taking on vocal coaches and guitar lessons to further their creative evolution. The result is extraordinary, bridging the history of hard rock and metal while simultaneously powering it forward into the future.

Founded in 2000, Trivium catapulted into the first ranks of modern metal with 2004’s Roadrunner debut, “ASCENDANCY,” which was named “Album of the Year” by none other than Kerrang! 2006’s “THE CRUSADE” incorporated new melodic colors into the band’s sound, resulting in widespread critical applause and a top 25 Billboard 200 debut. “SHOGUN” followed two years later and received event greater acclaim and chart success, including a #1 debut on the UK’s Rock Albums Chart. “IN WAVES” hit #1 on Billboard’s “Hard Rock Albums” upon its 2011 release, not to mention a stunning top 15 debut on the overall Billboard 200.