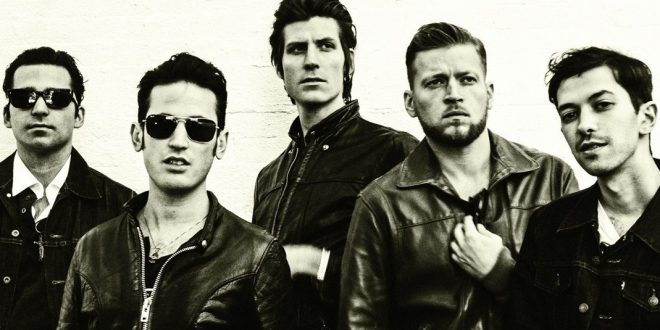 Album Review. Jeremy and the Harlequins: Into The Night

Leather Jackets. Fast cars. Women. Yes, Jeremy and the Harlequins are back with their second album Into the Night, out August 5th, to pick up where their last record left off and usher back in the bands slick style they are well known for.

The LP opens with the title track and from the first few seconds of a pulsating guitar riff that serves as a base backdrop to the verses that is undeniably catchy, it’s easy to see why this is the leading single off the album. Lead singer Jeremy Fury has his usual 50s swagger crisply singing some killer visual lyrics such as “turn the radio on/Elvis and me singing at the top of our lungs.” Fury’s energetic vocals match the uptempo beat, which all help to drive the tune and get listeners bopping their heads along. It definitely feels a bit more modern than the bands standard sound, but the lyrics definitely give it a throwback vibe and make it the ultimate car jam of 2016. Hard to get out of your head, (why would you want to anyway?) “Into the Night” is infectious and showcases the progression of the sound the band is cultivating on this new record.

Next up is a track that is just as good. “No One Cares” has a jangly backbeat that allows the band to balance their retro and modern feel. Fury is full of enthusiasm, like a shot of adrenaline to the body, slick and full of attitude, with guttural grunts and screams to boot. The addition of the harmonica helps bring some dynamics to the song, even if it is only briefly. Though the tune may be upbeat, the content is rather sad and desperate as the band expresses “I’ve been around for so long no one knows my name,” and how they still haven’t reached fame. A debatable issue, but one that lots of artists will be able to identify with, especially the line about selling ones soul to the gods of rock n’ roll. It’s one of the many standout moments on the record clearly not to be missed.

Switching gears, towards the end of the LP, Jeremy and the Harlequins deliver one of the finest tunes they have ever produced. Here the band ventures into Everly Brothers territory with “There’s a Girl.” The best ballad on the album, it’s a sound that is 100% authentically retro, so much so that listeners may think it is a cover of some unearthed little known 50s tune. Besides the spot on harmonies there are the simple lyrics that get to the core of a breakup that works in any era. “I gave her all my heart/she held it in her hands/then she ripped it all apart,” Fury sings honestly and continues to tell the story of a girl whom he pictured walking down the aisle to and how she crushed his spirits. But he doesn’t blame the girl in question here, instead he sings “but there is no turning back/I brought on this heart attack.” It’s an interesting little twist “it wasn’t in the stars/it wasn’t in my chart,” Fury croons, fully believing in the universe even if he has been let down by it. Kudos to the band for trying something different and knocking it out of the park.

The best track on the LP comes at the very end. “Oh Yeah (I Did it Again)” is the song that sounds the most like something that could have fit in as a bonus track on their first album. Completely in the bands wheelhouse it has an amazing swagger thanks to Fury’s sharp vocal delivery which is full of attitude that matches the content of the song about a guy who is “selfish and carried away” tries to change but can’t. It has a doo wop flair to it but also has a hint of The Beatles vibe to it and has the kind of chorus that one will be humming long after the first listen. The breakdown, complete with snapping fingers, brings attention to the small details that Jeremy and the Harlequins utilize to complete their sound.

Into the Night is a solid sophomore delivery that touches upon some subjects that were common in 50s-60s songs such as high school first loves (“Let Her Run”) and fatal deaths along the lines of classic songs“Tell Laura I Love Her” or “Last Kiss” on “For Angles.” The only less than stellar track is “Drinkin’ By Myself,” which has lyrics that are a little too simple and doesn’t have the best melody but Fury still carries the song showing that a great frontman can take any song and with the right attack can still pull off.

Into the Night was this reviewers number one most anticipated album of 2016, and it certainly did not disappoint. When August 5th rolls around make sure to grab yourself a copy and give a listen to one of the best bands currently on the music scene.

Get it now on iTunes