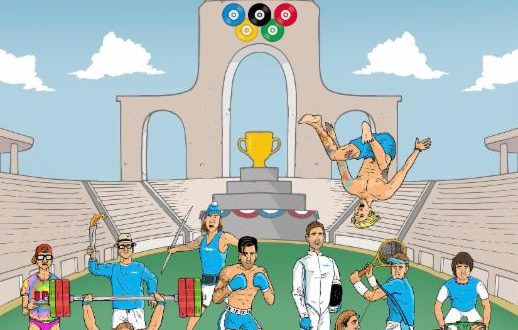 Fearless Records is excited to launch another adventure-filled #FearlessSummer on the Vans Warped Tour 2016. This year’s line up features Mayday Parade, Real Friends, Tonight Alive, The Summer Set, The Word Alive, Ice Nine Kills, The Color Morale, Volumes, Chunk! No Captain Chunk!, Oceans Ate Alaska and Wage War. In addition, Jarrod Alonge will return for a second year as the Fearless Records video correspondent. Jarrod will be checking in from the road via @FearlessRecords Instagram and Snapchat with daily updates and artist interviews.

To celebrate the kickoff, the Southern California-based label will be giving away tickets to Warped Tour by following this LINK. Vans Warped Tour will start in Dallas, TX on June 24 with General Admission tickets available HERE.

Issue #336, which also includes free Warped Tour posters, is available in stores, on the AP iPad edition, and for purchase at Altpress.com.

NEW ALBUM: Black Lines (Release Date: Oct. 9, 2015)
Florida pop-rock quintet, Mayday Parade delivers driving rock riffs and signature heartfelt lyrics with their newest release, Black Lines with a #1 spot on Billboard’s Rock and Alternative Charts. Since forming in 2005, the band has amassed one of the most loyal, rabid fan bases around thanks to energizing concerts and four studio albums full of heart-on-sleeve lyrics. While musically raising the bar year after year, Mayday Parade constantly reminds fans and industry alike just why they are leaders of their field.

NEW ALBUM: The Home Inside My Head (Release Date: May 27)
Noted as one of Alternative Press Magazine’s Most Anticipated Albums of 2016, Chicago’s punk-pop band Real Friends are excited to share their new album, The Home Inside My Head. Real Friends were one of the biggest breakout acts of the 2014 Warped Tour following the release of their debut album, Maybe This Place Is The Same and We’re Changing bowing at #24 on the Billboard Top 200 and Rock Sound’s #10 on the “Top 50 Albums of the Year.”

NEW ALBUM: Limitless (Release Date: March 4)
Sydney, Australia’s Tonight Alive have become a global force, brimming with energy on stage and off – bursting a lust for life that overflows into their lyrics, their music and explosive live shows. The band has experienced a world’s worth of road experience including two stints on the Vans Warped Tour, sharing the stage with Pierce The Veil, All Time Low, PVRIS, Mayday Parade, Taking Back Sunday, and The Used, and multiple tours in the UK, Europe, Australia, and Japan. The band’s latest release Limitless was noted by Alternative Press as one of the Most Anticipated Albums of 2016 and reached #5 on the iTunes Rock Chart.

(July 30 – Aug. 13)
NEW ALBUM: Stories For Monday (Release Date: April 1)
The Phoenix, AZ quintet pulls influence from classic rock artists, blended with a passion for irresistible 80s pop in their new album Stories For Monday with an infectious brand of feel-good and edgy pop-rock. Led by poignant single, “Figure Me Out” and the infectious “Missin’ You”, new album is positioned to be The Summer Set’s most powerful release to date. Breaking out in 2013 with their debut album, Legendary spawned hit singles “Boomerang” and “Lightning In A Bottle” that led to a string of success that included a full summer on the Main Stage of Vans Warped tour, TeenNick’s Top 10, winning the iHeart Radio Rising Star, and appearing in Macy’s “Back To School” and Thanksgiving Day Parade national broadcasted campaign.

NEW ALBUM: Dark Matter (Release Date: March 18)
The Phoenix heavy alternative quintet amplify every aspect of their rock signature sound, personal lyrics and melodies by weaving together airy guitars and polyrhythmic chug punctuated by gnashing screams and mind-bending percussion.The band tirelessly toured alongside the likes of Killswitch Engage, The Devil Wears Prada, A Day To Remember, Motionless In White, and more – in addition to numerous stints on the Vans Warped Tour. They are recognized as Alternative Press Magazine’s Most Anticipated Albums of 2016, Dark Matter also debuted at #1 on the iTunes Metal Chart.

NEW ALBUM: Every Trick In The Book (Release Date: Dec. 4, 2015)
Through the art of intricate song writing and elaborate storytelling, Boston MA’s Ice Nine Kills have the ability to engage and captivate listeners, winning over a fanatical legion of followers across the nation. Their drive and dedication has made a lasting impression on fans both sonically and through their explosive live show, creating a kinetic energy through each performance. The band’s latest release, Every Trick In The Book, debuted at #1 on the Billboard Heatseeker’s Chart.

NEW ALBUM: Desolate Devine (Release Date: Aug. 19, 2016)
The Rockford, IL five-piece are known to skillfully combine the elements of intricate musicianship with a passionate message. Their insistence on communication, participation and inspiration puts them in front of the pack, as the band crisscrosses the globe connecting with crowds while on tour with contemporaries like Of Mice & Men, We Came As Romans, Escape The Fate, August Burns Red and The Devil Wears Prada. Reflecting their last release, Kerrang! Magazine noted Hold On Pain Ends as “one of the most hard-hitting records of the year.” The band looks to shake things up even more with their highly-anticipated album, Desolate Divine, out in August.

(June 24 – July 17)
NEW SINGLE: Feels Good (Release Date: June 16)
Los Angeles heavy rock outfit VOLUMES eclectic musical influences blend together to forge a creative bond between several types of genres that are worlds apart. The combination of their efforts results in fusions between intricate patterns, melodies, and progressive-yet-not-to-be-overlooked-aggressive, straight to the point, metal. The band is currently in the studio recording their next album.

NEW ALBUM: Get Lost, Find Yourself (Release Date: May 18, 2015)
Named after the 80’s classic adventure movie “The Goonies,” the French pop-punker’s sound vacillates between two different extremes, folding high octane, crazy catchy pop-punk melodies into pummeling and potent hardcore. Armed with a solid reputation for shaking the rafters at the venues in which they play, the band has an already impressive tour resume including A Day To Remember, Motionless In White, and Blessthefall.

Previous Gallery: Pierce The Veil at House of Blues in Houston, Texas 6.21.16
Next Gallery: frnkiero andthe cellabration at Shadow of the City Festival 2016, Asbury Park NJ