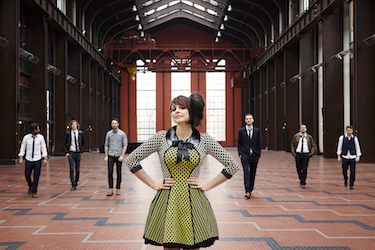 Parisian seven-piece electronic big band Caravan Palace is premiering the video for the track “Wonderland” off their critically acclaimed third full-length album,<|°_°|>, out now on Le Plan Recordings. The track is also available as a single, featuring the extended mix of the album track “Mighty (feat. JTFH)” on the b-side.

The band is currently on tour in North America with remaining shows in Salt Lake City, Denver, Minneapolis, Chicago and Detroit. Their live show has elicited critical praise, with the Los Angeles Weekly raving that frontwoman “Zoé Colotis is a sassy chanteuse who oozes oodles of charisma as she kicks up her heels merrily and scats-sings with rapid-fire intricacy over her band Caravan Palace’s joyfully jazzy arrangements,” while the Austin American-Statesman says the band “filters the spirit of Django Reinhardt through an electrocool super collider to produce next-generation gypsy jazz with a European club vibe.” The Boston Globe hails the band as “jaunty, quirky, and frenetically danceable,” and the San Francisco Weekly notes that “if Daft Punk and Django Reinhardt had a baby, it would sound like Caravan Palace.” See below for a list of dates.

Since its release, <|°_°|> has received extensive critical praise. In premiering the record, KCRW noted that “this new album keeps the good times coming, with a potent mix of fun-loving genre mashups.” Host Marco Werman of PRI’s “The World” commented on air, “you can see my body moving, because…it is!” and PopMatters named the album the “#2 Pop Record of 2015.” The record also saw chart success, reaching #3 on Billboard’s Electronic/Dance Album chart and #5 on Billboard’s Heatseekers chart; it has remained on the Billboard Electronic/Dance chart for over 35 weeks.

Upon <|°_°|>’s release the group performed on “Later…with Jools Holland.” The video for the single “Lone Digger” has been watched over 15 million times via YouTube.

Fronted by vocalist Zoé Colotis and founding members Hugues Payen (violin), Charles Delaporte (upright bass) and Arnaud Vial (guitar) alongside Antoine Toustou (trombone, machines), Caravan Palace cites influences as diverse as Cab Calloway and Daft Punk. The group first formed when approached to compose the score to a silent porn movie from the early 20th century and broke out in their home country with their self-titled 2008 debut, which went Platinum in France. Their profile in the U.S. has grown largely via word of mouth, selling over 50,000 records in North America and recently performing at Coachella, where LAist included them in their list of “15 Under-The-Radar Acts…You Shouldn’t Miss” and noted that “you’ll need your dancing shoes on for this keyboard and horn-heavy band.”

Previous Can You Hear Me? Unveils Pride Tee to Support the Victims of Pulse Orlando
Next Album Review: Thousand Foot Krutch – “Exhale”