Home / Photography / Show Review and Gallery: Blaqk Audio at The Bowery Ballroom in NYC on 05/22/2016 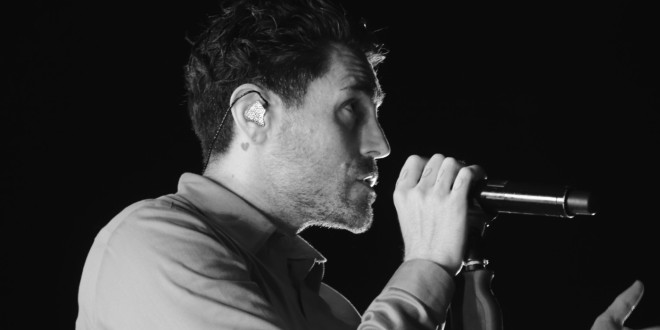 Show Review and Gallery: Blaqk Audio at The Bowery Ballroom in NYC on 05/22/2016

Blaqk Audio’s The Material Tour came to an end this past Sunday, May 22nd at a sold-out Bowery Ballroom in New York City. Blaqk Audio has been on tour in support of Material, the latest full length album in their repertoire. The electronica duo made up by AFI’s frontman Davey Havok and guitarist Jade Puget enthralled the crowd with their engrossing performance, leaving everyone sweaty, exhausted, and delighted.

Starting the night’s musical affair was California/UK group Charming Liars performing titles off their latest EP, 12:31. Prior to their set we got to chat with singer Kiliyan Maguire and learned about the themes behind the EP and how the band came to be known as the Charming Liars.

Supporting act, Night Riots worked up the audience with their indie-rock-dance tunes, further fueling the anticipation with songs such as their Billboard Alternative hit ‘Contagious’ and ‘Follow You’.

When the venue’s overhead turned low to give way to stage lights, my heart started racing. I knew, as did everyone present, this was going to be a treat. After being away from the spotlight for almost four years, the crowd was hungry to see Blaqk Audio perform.  Puget made his way across the stage to get behind his equipment and plunged into a remix of beats leading into ‘Again, Again, and Again’. Havok hit the stage and the place went wild. All bets were off. We were launched face first into a full-on dance party.

The setlist featured music from the entire catalog that makes up Blaqk Audio, sure to please fans both old and new. Songs included: ‘Anointed’, ‘Between Breaths (An XX Perspective)’, ‘Cold War’, ‘Waiting to Be Told’, and ‘Faith Healer’. Everyone in my immediate vicinity was singing along passionately, making it hard at times to hear the singer himself. But that’s what happens when people love an artist’s music.

Puget’s transitions between tracks were flawless and Havok’s stage presence and vocal delivery was palpable on every note. I could feel the music reverberating through the fabric of my clothes, keeping the energy locked on one level, intense.

If you have the opportunity to attend a Blaqk Audio show, do yourself a favor and go. Because ‘Let’s Be Honest’ if you give the ‘Material’ a chance and go with a couple of your ‘Curious Friends’, you’ll be in total ‘Bliss’ by the end of the night. Okay, that was corny, but you get the point.

Check out Blaqk Audio at: