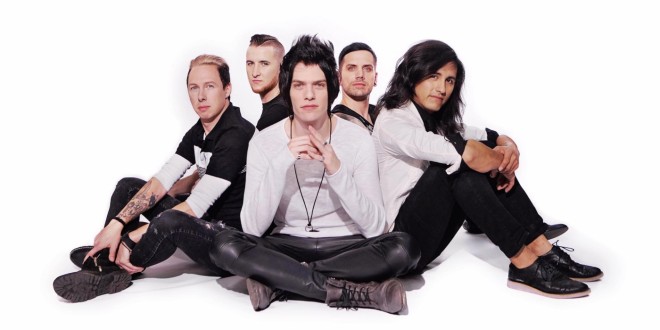 Patrick Thompson of Alesana Announces New Project – Versus Me

On September 24, 2014 Patrick launched Versus Me, a Wisconsin based metalcore act with members James & Lee Milbrandt of Serianna, Clint Greendeer of Guardians, and Dustin Helgestad of Crossing The Delaware. Operating under the radar for the past year, Versus Me has released multiple singles, music videos, and has consistently been playing shows in the Midwest region including all major Wisconsin festivals, and a tour with Fearless Record’s act I Prevail. Now gearing up to release their debut full length album Changes this September 13th, Versus Me is on their way to becoming a name in the industry.

About Versus Me:
Every generation has its stars that audiences can point to as meaningful people who rise above the noise of empty promises, passing trends and inflated egos. The most important, vital and uplifting songs are the ones that connect with listeners on a level that’s deeper than a catchy melody, a pulverizing breakdown or a memorable groove. Only a handful of musicians are able to come together with likeminded friends and capture that sort of lightning in a bottle in the practice room, in the studio and onstage.

VERSUS ME is such a band for today’s subcultural and mainstream pop crowds alike. They have crafted a debut album featuring the type of crowd-ready anthems heard in stadiums on the One Direction/5 Seconds Of Summer world tour, while simultaneously harnessing the heaviness and earnest delivery found each year on the Warped Tour’s main stage and in the pages of Alternative Press, Rocksound, Kerrang! and Big Cheese.

The five men of Versus Me are of the rare breed that walk-the-walk even more than they talk-the-talk. Sure, plenty of bands say they care about their fans, but these guys live and breathe that concern. Part of the reason for that is because they’ve been there. They’ve connected with albums from their favorite bands that spoke to them in times of hardship, disappointment, uncertainty and insecurity. They know how important it is to have an anchor when the storms of the world rain down. When it’s essential to ensure that people know they are not alone in their struggle, bands like Versus Me stand tall.

Coming together in song and spirit from the remaining foundations of Alesana, and earlier Midwest screamo and metalcore bands like Guardians, Serianna and Crossing The Delaware, Versus Me represent the full realization of what five friends can create when united in passion and vision. Imagine the pop-punk/heavy stomp combo of A Day To Remember, the emotionally-driven shred of Pierce The Veil, the fierce onstage delivery of The Devil Wears Prada and the bottom heavy bellow of Born Of Osiris seamlessly coming together with the smooth, driving rock of bands like Copeland, Acceptance and Daryl Palumbo’s Head Automatica, all with a delicious cherry on top made from the soaring melody of Maroon 5. Those ingredients are just some components of the Versus Me recipe. The band’s diverse influences, their varied experiences on the road (in bands and as crew), and the ascent of likeminded bands like Bring Me The Horizon and Asking Alexandria, have paved the way for Versus Me to quickly connect with fans on a worldwide scale.

The band’s debut album was recorded in Nashville with additional tracking taking place in Versus Me’s home state of Wisconsin. Josh Napert produced the album and Joel Wanasek (Righteous Vendetta, Inhale/Exhale, Phinehas) mixed and mastered it.

Even as Versus Me take aim for mainstream chart success, arena headlining shows and the rapt attention of the diehard fans who drive and propel the underground scene, the band’s number one goal remains simple. Versus Me wants nothing less than positivity, communication and connection with their audience. They want to show the world that their music, and all good music, can help people with life’s toughest trials and hardships. Versus Me yearn to connect with each and every person they can, whether it’s to talk about music, or to just learn about where people are coming from and who they are.

Packing an arsenal of melodies, hooks, breakdowns, electro-fueled bounce and deep grooves, Versus Me’s message of uplifting goodwill is about to make itself heard loud and proud – from the stage, from cars, speakers, headphones and anywhere possible.

Tags A Tension Alesana Music Video Patrick Thompson Versus Me