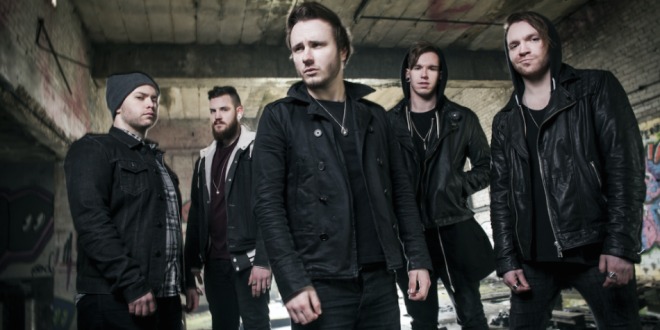 “White Flags” – produced by David Bendeth (Paramore, A Day To Remember) and mixed by Josh Wilbur (Avenged Sevenfold, Megadeth) – is the band’s second installment of stratospheric metal, featuring frontman Austin Dickinson’s soaring vocals. Scattered with epic strings and pianos, the track is a taste of what’s to come from a band firing on all cylinders as they prepare to make their mark with their debut EP, due later this year.

After the band’s triumphant UK tour in March with Trivium, which attracted rave reviews, the London five-piece will be bringing their explosive live show to various UK festivals including The Great Escape and Camden Rocks in May and Download in June.

They then head out on a huge U.S arena jaunt alongside Five Finger Death Punch, Shinedown and Sixx:A.M during October and November. The tickets for this highly-anticipated fall tour are on sale now – for more information on the band, the tour, and exclusive VIP packages, head here today. Every fan that purchases a ticket via Ticketmaster will receive a FREE tour sampler which features the band’s new track, “White Flags”.

Comprised of vocalist Austin Dickinson, guitarists Conor O’Keefe and Will Homer, bassist Stefan Whiting, and drummer Dave Fee, AS LIONS formed in late 2014. Having played various shows throughout 2015, they have been hard at work recording their debut album in the US – news of which will be announced in the coming months.

Cultivating inspiration from bands that encompass a wide range of rock and metal (Muse, 30 Seconds To Mars, Bring Me The Horizon), fans can expect a blistering record that will both fuel the mosh pit and encourage crowd sing-a-longs.

Previous Patrick Thompson of Alesana Announces New Project – Versus Me
Next HIT THE LIGHTS RELEASES ACOUSTIC VERSION OF “BLASPHEMY, MYSELF AND I” FROM UPCOMING EP