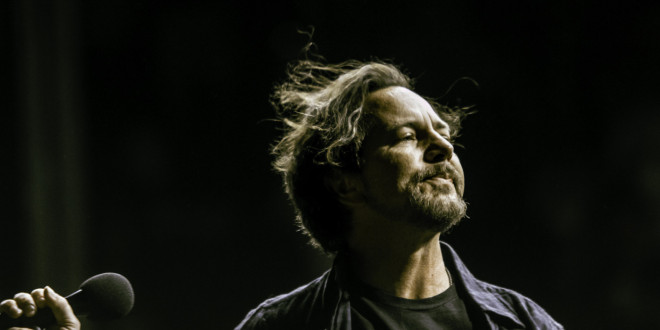 In life you have a bucket list. I have been a photographer for a long time, but edged into music photography a few years ago. The only other passion I have in life is for music. As a teenager I grew up listening to a bunch of styles, but one day I heard this song called “Jeremy” by this band called Pearl Jam. I made my mom take me to the mall and I bought Pearl Jam’s Ten on CD and played it until I warped it. Thus began my love for grunge, which slowly slipped to all things METAL. So, back to the bucket list. I received the news that I was going to be shooting Pearl Jam’s  tour-opening show at BB&T Center in Sunrise, FL and reality set in that I was going to be able to do my part to document  one of my bucket list bands.

The show kicked off with “Go”. Now mind you, as a photographer I can only shoot the 1st three songs and it’s usually an exhilarating blur of trying to capture the perfect shot – the band chugging out classic songs, while a crowd of thousands reciprocates the energy at my back. I remember the driving beat of “Mind your Manners” followed by “Corduroy” and the crowd became a crazy rush of energy we felt all the way in the pit. It was only the beginning of what would wind into an incredible three-hour set. After a few more songs, frontman Eddie Vedder entertained the audience by talking about the faces he saw in the tiles of his hotel sink that day and how they appeared to be judging him.  He also admitted to suspecting his toothpaste’s flavor crystals were dosed and he warned us to watch out and not to let anyone slip anything in our drinks.

After the next run of songs including a sing along of “Sirens,” Vedder stopped the show once more to tells us that it was guitarist Mike McCready’s 50th birthday. After a crowd-sung “Happy Birthday,”  the band played part of Cheap Trick’s “Surrender” to celebrate the fact that Cheap Trick is being inducted to the Rock and Roll Hall of Fame.  Pearl Jam performed, talked to the crowd and just entertained the hell out of me. My highlight songs were “Evenflow,” “Last Kiss,” “Black,” “Comatose,” “Betterman”  and“ Alive.”  My biggest disappointment was they didn’t play the one song that made me fall in love the band in the first place. I guess I will have to live with the other 31 songs that I did hear. On a whole, they were phenomenal. The energy, the lighting, the at-capacity stadium of singing fans just made the experience unforgettable.

Metal!!! I am never without a camera, I am never without music, I can not live without coffee... I cook, I manage a band (shameless plug Modern Day Outlaw), I shoot people with my camera, and I drink tequila and whiskey... That's me in a nutshell! Follow me on Facebook, Twitter, and Instagram.
@@Melly1172
Previous Herrick – Cottonfields
Next Rebecca Moreland – Freak Soul