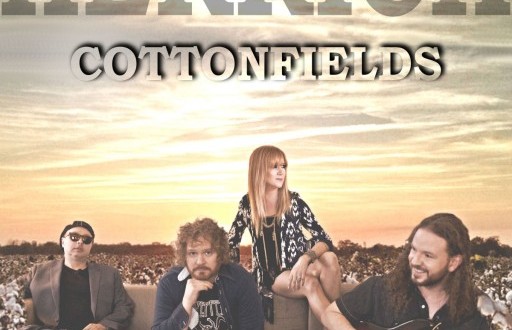 Herrick isn’t your typical pop country product. They have the songwriting chops to produce memorable, radio-friendly material, but they also rock out with surprising conviction and confidence. Much of their ability to master two decidedly different musical stances is thanks to vocalist Donna Herrick’s jaw-dropping ability to change her approach with apparently little effort. The band’s facility for this quick change ability is equally vital – Herrick’s rockier excursions sound every bit as convincing as their marriages of acoustic guitar and mandolin.

Few songs on the album sound as immediately credible as the title song. “Cottonfields” flies past listeners with a minimum amount of fuss. There are no flashy or extended instrumental breaks weighing the song down. Instead, Herrick adopts a meat and potatoes approach that works because it’s far from reverential. They back away from the title song’s stripped down rock for the second track, “Hurt like Heat”, but Herrick continues to deliver emotionally believable performances despite any drop in instrumental intensity. It’s been many years since a band incorporated mandolin so completely into what they do, but it works for Herrick and gives the band an unique sonic signature. “In California” is the album’s first ballad of sorts and has an impassioned take that suggests the lyrics are born from personal experience. “Life in a Song” is quite earnest and Donna Herrick’s vocal certainly gives the song a lot of emotional ballast, but some of the song’s turns are entirely too predictable despite the intimate musical setting.

Herrick’s preoccupation with relationships continues on the blues grinder, “Freedom Love”. Herrick avoids being too hamfisted here with their interpretation of the blues thanks to tempering mandolin touches. It’s a blues filtered through the band’s combined consciousness, a sort of pastiche and re-envisioning in one that brings high drama but never reflects that too obviously. “Your Love” is Cottonfield’s first straight up ballad, but instead of some inert paean to love and longing, Herrick keeps things a little breezy and melodically active. The second to last song on the album, “Said and Done”, takes a final detour back into gritty blues rock posturing and Donna Herrick responds with, arguably, her edgiest vocal on the album. Cottonfields concludes with its clearest ballad, the short and piano driven “Together”. Herrick pulls out all of the stops with this one and gives a performance alternating between longing and despair.

This is a release capable of pleasing non-commercial and commercial sensibilities alike. The balance between entertainment and transformation is stable – Cottonfields begins from a position of strength and shows great instincts for knowing when to charge and pull back. They have extraordinary confidence for a band only on their second album and the aforementioned virtues reflect that. They reach too far occasionally and come up empty, but ultimately, many music fans are going to admire a band that does so many things well yet persistently shows the willingness to try more.