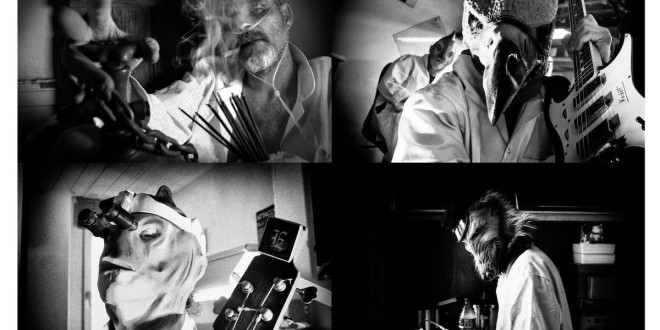 This collaboration between American and Italian musicians will likely go down as one of 2016’s most intriguing efforts. The press materials describe the band’s music as kraut rock meeting ambient music, but it scarcely details the vast array of influences that the band draws from for the five tracks on their debut. The writers and performers for this music clearly view art as a transformative process through which the seeker is compelled to discover how classical themes and motifs apply to their own lives while fully immersing themselves in the evolution of their art. At risk of sounding pretentious, the experience of listening to this album helps one realize, by its conclusion, that the Menimals never existed before the first song and that the album itself is a chronicle of their own birth and transformation. When seen in this light, it isn’t a stretch to say that this is a contender for album of the year in some circles. Few musical works are so fully and clearly conceptualized.

The album’s first song, “In This Unforgiving Heat”, is an unlikely Arabic-influenced excursion that seamlessly wraps around the band’s ambient tendencies. It’s a surprisingly effective marriage between two seemingly disparate musical styles and the exquisite topping to it all is the evocative array of vocals utilized. The band’s lyrical musings freely mix the pseudo-poetic and plainspoken, but it’s the powerful way they are conveyed that is likely to linger longest in the memory. “Dodecahedron” is a surprisingly melodic number, but the Menimals don’t tackle song conventions like any band you’ve known. There’s something brilliantly perverse about offering a smattering of conventionality to listeners before you twist it with a counterpointed ambient swirl that denies its mainstream accessibility. It’s also the album’s shortest track and, as a result, resists the band’s natural urge to meander heard in the remaining songs.

“Tetrahedron” builds from a quiet, forlorn piece driven by vocals and guitar into another Grand Guginol of music horror when the world seems to come crashing apart in the song’s second half. “Transition from a Cube to the Octahedron” sprawls menacingly in every conceivable direction and any gentleness and light peering through in the earlier track is completely obliterated. There’s little question that this is the album’s climatic moment, an explosion of the elements comprising the earlier songs and bulldozes listeners with its immensity. “Bird on the Wing as a Hinge” stretches out in similar ways but returns the band to more conventional ground with its increased utilization of instrumental passages. The tendency to over rely on their ambient sound plagues the Menimals at certain key points and this is one. As a falling action, however, it works well and winds the album off in a satisfying way.

This isn’t entirely a hit, but it scores more than it misses. As mentioned above, the balance on some songs is off and listeners are left with little else except inaccessible sonic collages. The Menimals, however, never sustain such mistakes for the entire length of a song and, as such, every track has numerous merits. Regardless of any weakness, this is a brave and daring effort.