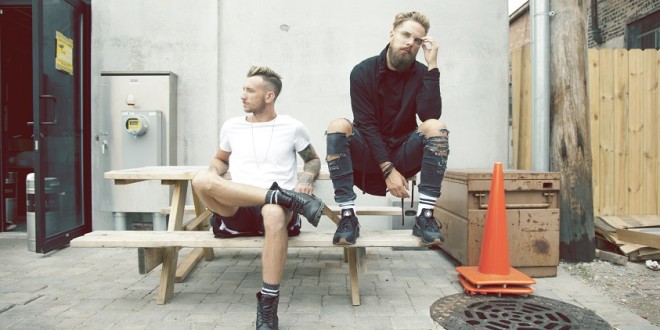 Colours to tour North America with Andy Black in support of debut album “Ivory,” out now on Victory Records

Fresh off a run of dates with Robert DeLong, Florida-based duo Colours is set to tour North America this summer with electronic metal artist Andy Black. Complete tour dates are at Beyond the Stage and below.

Colours recently made their debut appearance on multiple Billboard charts with their first full-length album Ivory, hitting #16 on the New Artist Alternative chart, #38 on the Heatseekers chart and #130 on the Indie chart. The record previously came in at #24 on the iTunes Alternative chart. The album has been featured on Apple Music’s “Best Of The Week” and Spotify’s “Digging Now” playlists. Watch a preview of their recent appearance on “JBTV” HERE.

In addition to retail and streaming success, including 1 million+ Spotify and Apple Music streams, over 4,000 singles sold and 100,000+ YouTube views, Ivory has received critical acclaim. Cool Huntingpraised the album’s most recent single, “Slow,” calling it “a track that will appeal to those who enjoy the conscientious pacing of Twin Shadow and the alt-pop appeal of St. Lucia,” while PopMatters hailed the song “Lawless” as a “sleek new single.” In premiering the video for the record’s first single, “Monster,” Diffuser.fm noted that “fusing the sort of dark electronic undertones of Purity Ring and Crosses with post-modern, Weeknd-tinged R&B, Colours have created a lush sound that’s as dangerous as it is seductive.”

With Kyle Tamo on vocals and Morgan Alley on drums, the band entered the studio in early 2015 with producer Shaun Lopez (Crosses,Far, Deftones) to record their first full length. Ivory follows their self-released EP Skin and Bones, which prompted Alternative Press to name the band one of the “100 Bands You Need To Know” in 2015.

Formed in 2013, the band started off by releasing a series of music videos while working on inspiring ideas for the set for their live performances. “Having only two members offers us a unique and advantageous opportunity when we are creating,” divulges Tamo. The duo wrote the songs for their new album over a 14-month period and started experimenting with new music around August 2013. The recording took just six weeks at Lopez’s studio in Burbank. Of working with Lopez, Alley said, “Shaun has a great ear for tone. He was able to listen to the songs we created, understand the direction and breathe new life into them. In discussing the album’s lyrics Tamo explains, “We write with someone else’s feelings in mind. There is a purposeful vagueness to most of my lyrics, preserving the attractiveness of personal interpretation.”

Previous Menimals – s/t
Next Regretting The Past: Hinder – Extreme Behavior