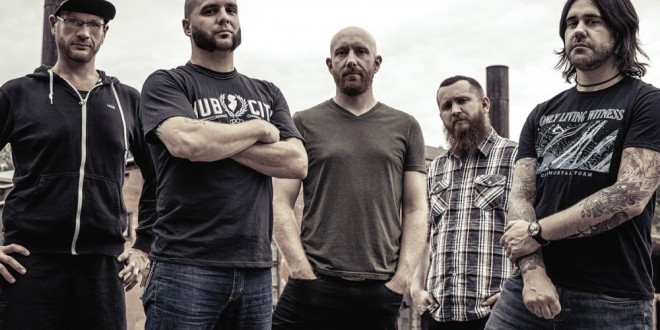 American metalcore promises several things: aggression, headbanging, moshing, and above all, a great party. Genre gods Killswitch Engage have promised all of the above, embarking on the Incarnate tour, celebrating their recently released album of the same name. Along for the ride are up-and-comers Toothgrinder, old friends 36 Crazyfists, and the wildly popular Memphis May Fire. This review will cover stop number three of the tour at the Uptown Theater in Kansas City, on March 19th.

New Jersey’s Toothgrinder kicked off the night in support of their full-length debut Nocturnal Masquerade, released early this year. Hailing from the heartland of American metalcore, the band touts the expected fare: fry screams, thick guitar riffs, and heavy kick/guitar synchronization. Despite an early technical difficulty with one of the guitarists, the band powered through like true professionals. Upon the issue’s resolution, the music picked up seamlessly and though the early crowd seemed largely unfamiliar with the band’s music, the swiftly-growing mass of attendees still responded positively after each song with a warm round of applause. Most refreshing were the moments in which the band broke from the full-on brutality and indulged in more calculated tension-building instrumentation, while vocalist Justin Matthews chanted in a half-growl, pulling the audience into the build-up before the song’s crushing climax.

Visit Toothgrinder at their Facebook page here, or check out their merch booth at each tour date, where Nocturnal Masquerade is available on disc and vinyl.

Those familiar with tour headliners Killswitch Engage are bound to be familiar with Alaskan metalcore four-piece 36 Crazyfists. While not as recognized as the former, 36 Crazyfists has existed for longer, and both bands had broken into mass appeal almost simultaneously in the early 2000s. Torch-bearers in every sense, the band is supporting their seventh release, Time and Trauma, which, though somewhat more brooding than previous releases, still maintains the classic metalcore sound which had carried them since their earliest efforts. Especially noteworthy is the band’s ability to present a full-bodied sound on stage with only a single guitarist, bassist, and drummer providing the instrumentation. This is largely to guitarist Steve Holt’s credit, whose style involves playing root chords on the lower strings and melodies on the higher strings simultaneously.

After opening with the slow, heavy “Vanish” from their latest album, the crowd became noticeably more animated when the band launched into the circle pit-starting career staple, “I’ll Go Until My Heart Stops”, given further drive by vocalist Brock Lindow’s multiple prompts to get moving. The moshing and crowd involvement further intensified when the band graciously played the first quarter of their breakthrough album A Snow Capped Romance, including fan favorite “Bloodwork”. After touching briefly on The Tide and Its Takers, the band played several more songs from Time and Trauma before closing to massive fanfare with one of their classics.

Relative newcomers to the genre with their first album released in 2009, Memphis May Fire – hailing not from Memphis, but from Dallas, Texas – provided direct support to Killswitch Engage. Carriers of the wildly popular modern form of American metalcore – that which includes frequent alternation between full and half-time feel, open chord chugging, and alternation between quintessential fry screams and pop-punk clean vocals – the band drew a sizeable and rabid following to the Uptown Theater, who were prepared to mosh, crowd surf, and even throw clothing right from the beginning of the band’s eight-song set.

After an explosive opening with “Beneath The Skin” from their latest album Unconditional, following selections came mainly from the same album and its predecessor, 2012’s Challenger, save for “The Sinner”, taken from 2011’s The Hollow. Between most songs, vocalist Matty Mullins spoke to the audience about the meaning of the upcoming song or his feelings on the tour, to which the audience was expectedly responsive. The energy of the guitarists during each song paired with some impressive drumming by Jake Garland made Memphis May Fire’s set the perfect precursor to the main event.

Unquestionably one of the most significant acts in American metalcore, Killswitch Engage usually play to large audiences from a festival stage, so welcoming the band to the Uptown Theater – a mid-to-large sized club – is truly a treat for any fan. Formed in 1999, after recording two albums with original vocalist Jesse Leach, the band replaced Leach with Howard Jones who stayed with the band for three albums, including their breakout album The End of Heartache. Jones departed in early 2012, with Leach re-joining the band for 2013’s Disarm the Descent, furthering the split of many fans into separate camps supporting either vocalist as superior.

Regardless of feelings on the subject, it is undeniable that Killswitch Engage is still at the top of their game, evident immediately when they took the stage to the new track “Strength of the Mind”, from the only one-week old album Incarnate. Throughout the considerable 17-song set, Leach remained an absolute vocal behemoth, sounding as powerful and present as on the band’s latest albums, as well as cutting clearly through the venue’s generally muddy sound mix. Especially captivating on songs like “Hate By Design”, “Vide Infra”, and “The End of Heartache”, Leach seems to be making the most of his return to the band, and his performance on this night of the tour certainly helped to prove that the band still retains their cutting edge after all these years.

Otherwise, all of the expected staples of a Killswitch Engage show were present: crushing sound, stellar light show, and of course, the band’s own special brand of tongue-in-cheek humor – largely courtesy of guitarist Adam Dutkiewicz. Garbed in a bandana, above-the-knee shorts, and a cloth knee brace, Dutkiewicz paraded around the stage with his guitar pulled up to his mid chest, pointing at audience members, pulling faces, and flexing – all while churning out the band’s roaring riffage and hilariously punctuating an inordinate number of guitar phrases with way over-the-top pinched guitar squeals. After every three songs or so, Dutkiewicz also made sure to egg the audience on – holding a vote to see how many people drank beer, and claiming that he bought and returned his own band’s latest album.

The rest of the band was understandably low-key in comparison, but still provided the pounding foundation of the band’s music. While approximately half of the band’s setlist ended up being taken from Incarnate and Disarm the Descent, Leach handled Jones-era staples such as “Rose of Sharyn” wonderfully, inviting the audience to sing along in even measure. With a wealth of material to choose from, the band was able to close the set with three of their biggest hits, leaving no need for an encore, as the necks of Kansas City’s headbangers were surely broken enough by that time. Killswitch Engage and company left audience members with more than their money’s worth on Saturday night, and future stops on the Incarnate tour are must-sees – especially for fans of Killswitch Engage who have never attended a show; now is the perfect time.