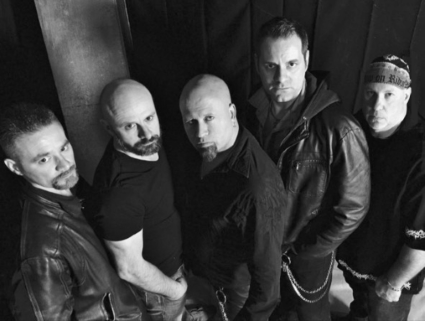 Album Review: Wicked Maraya – Lifetime in Hell (Out May 6)

Wicked Maraya might have been one of the few bands to leave real impact on metal during grunge’s uprising. Originally based in New York, the quartet brewed a small but tenacious flame of merit into Los Angeles’s Sunset Strip. They often presented themselves with a darker, more progressive sound—a contrast from the scene’s milieu of sleaze and decadence, and an inadvertent foreshadow of what would define heavy music in the coming decade. The release of Cycles in 1994 proved successful as the album reached #1 on the German Album Rock Radio charts. It went on to earn major magazine coverage, video play through Rock Video Monthly and Viva Television, and a solidified European presence for the band.

While fans have long accepted Cycles to be Wicked Maraya’s only album, that notion changed around 2011, as news of a new album—confirmed as the predecessor to Cycles—had surfaced. Those claims were further validated upon the original band reuniting full-time. And now, after five years and a 25-year shelf life, their true debut, Lifetime in Hell, will finally receive digital distribution via Massacre Records on May 6th.

Lifetime in Hell is expectedly raw, and a competent catalyst for the band’s abilities. Provided the album was produced by John Morris, an icon for his work with Iced Earth and Savatage, there’s no wonder its execution feels thickly melodically packed to the brim. “Sounds of Evil,” initializes the album’s concept of a demoness (Maraya) seeking to reap purity from the entire world. It takes an anthemic approach by hooking listeners into a big and melodic chorus at the very start. The riffs that follow hold nothing back, each lead melody punctuating the snares during the transition into the first verse. Vocalist Lou Falco naturally shifts between thrash and power-driven throughout each singing phase. I couldn’t get enough of the grit in his screams—raspy and torn, yet interestingly melodic in its own way. There is definite control in the pacing of the solos, rather than a brash attempt at showcasing virtuosity. On the title track, a real hook-friendly factor is sustained in its thick percussion and chugging rhythm guitars. The first two lines alone (“Close your eyes to a darker world around you/For the first time, see your life behind you) make the album’s art especially come alive. Four helpless civilians with the odds stacked against them. As the song progresses, they are given two choices: either risk facing a city in peril, or stay in limbo and miss out on saving themselves. On the other hand, its chorus takes on a broader in meaning, somehow indirectly addressing the drug-fueled excess of the metal scene (“Take me to heaven, baby/Walk down the road to Hell”). The gang vocals do much to pump up the riffs, contributing further to the band’s accessibility. Both “Tomorrow’s Child” and “Crash and Burn” have solid melodic and thematic foundations, but whereas the former succeeds in lyrical poignancy, the latter actually feels better-suited to avid metal listeners by way of its simpler message and thrash edge.

Toward the middle part of the album, the band’s thrashier elements assert dominance. “Seizure” is by far one of the heaviest tracks, featuring both chorusing-filtered and guttural screams. Once the riffing shifts in feel, its main melody is quite memorable, and could contend right along the ranks of Carcass’s “Heartwork”. That vibe of hysteria—as well as the melody from the previous song’s verse riff—is lifted into a track fans will recognize, “Johnny”. Contrary to the news of the album’s release, this track is by no means elusive, in that there are no alternate arrangements or lyrics present; it simply employs John Morris’s rugged and punchy production style. As for the song itself, it has a Rust in Peace-era Megadeth feel to it in how the verse’s vocals and riffs are utilized. Had this song been released as a single at the time it was recorded (around 1990), it would have ideally earned decent airplay on metal radio. But it’s generally fair to consider having commercial potential as only one of the band’s assets. The other track that peaks in heaviness is the following track, “The Calling,” which brings out the best of its phases all around. I loved how the hook melodies were given whole new feels even by subtle drum rhythm changes. The call-and-response interplay between the screamed and clean vocals is also well done, and somehow gives insight as to how those qualities were refined for Cycles. Even with the song’s shifting to faith for guidance, however, the innocence of the children has all but vanished. By “Blackout”’s opening phase, evil asserts itself as the triumphant force. The extent of this is felt so even something as fundamental as a heartbeat warrants the most pain. At the 2:55 mark is where total rocking commences: there is strong tempo and riff variety comprising the phase, one would strangely consider it a sin to not head bang along. Besides the album tracks, the band have also included two all-new originals rendered with both signature and updated sounds. “Suicidal Dawn” is my favorite of the two tracks. To me, it represents total rebirth, not only by simply rebranding their concept, but doing so at a time when expressing oneself with a heavy music style to a broad audience seems grim. It is a strong comeback in every right, and a rightful inclusion to an album that will finally see the light.

Overall, Lifetime in Hell is Wicked Maraya’s best foot forward. The hooks, the lyrics and the concept are all there, and although more suited to European tastes, it would have performed just as well. Perhaps that demographic is where the band will continually thrive. John Morris’s production is what put the band above the typical Los Angeles glam metal vein, and it is apparent right from the album’s first few measures. Whether long time fans long to relive the times, or just want to take a retrospective look at the band’s progression, give this album a go!

Check out the video for “Suicidal Dawn”:

I come from a family who is passionate about all things music. I learned to sing at an early age, and by 13, had my very own Fender Strat guitar. I tried my hardest at learning all that I could. Because I was born with cerebral palsy, I had to teach myself an adaptive playing style. I learned to write and record my own music, despite these difficulties. In college, I started making great use of my writing abilities by reviewing music, as well as copy editing. I guess it's best to stick with what you know, while welcoming a fair challenge at the same time.
Previous Album Review: Amon Amarth – Jomsviking
Next Show Review: Killswitch Engage, Memphis May Fire, 36 Crazyfists, and Toothgrinder at the Uptown Theater in Kansas City, MO – 3/19/16