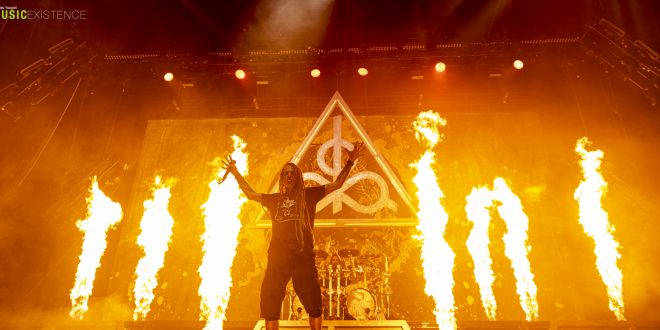 Lamb of God just finished up The Omens Tour which took them across North America and they brought a healthy dose of heavy metal bands with them. Killswitch Engage accompanied them throughout the entire trek and on this particular night Animals As Leaders and Fit For An Autopsy opened the show. The new YouTube Theater in Inglewood, CA, just a stone throw away from the football field at SoFi Stadium, was packed for this night of heavy metal from these amazing bands. 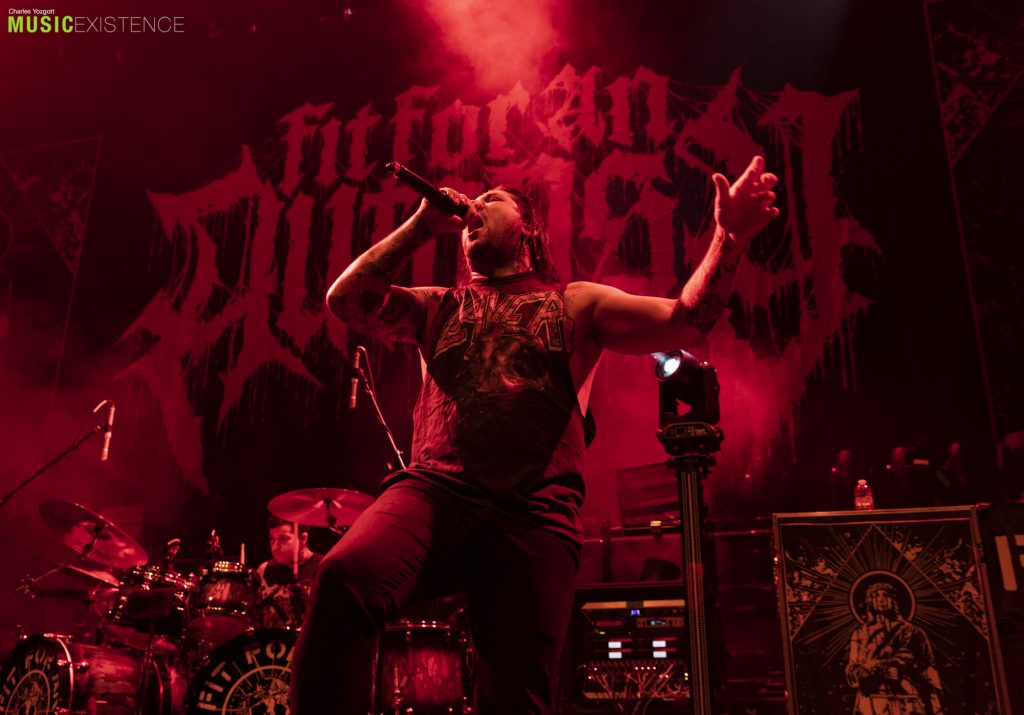 The night started with Fit For An Autopsy, who hail from Jersey City, NJ, giving the fans that showed up early a taste of three of their latest albums. They started their set with the opening and title track off of 2019s The Sea of Tragic Beasts and followed with “Your Pain Is Mine” which is the fourth track off the same album. Joe Badolato’s vocals blend well with the bands brutal sound and the energy on stage was top notch from each member. Their latest album, Oh What the Future Holds, which was released earlier this year is home to the next couple of tracks they played. “Pandora” and “Far from Heave” were performed perfectly and the mosh pits were just getting started. Drummer Josean Orta keeping the beat going while bassist Peter “Blue” Spinazola and guitarists Tim Howley and Pat Sheridan shred on their electric axes giving the fans a proper warm up for the rest of the night. The last two songs of their set was “Heads Will Hang” and “Black Mammoth” off of 2017s The Great Collapse. If you don’t get to shows early you’ll miss out on some amazing bands, and this night was full of amazing metal bands. 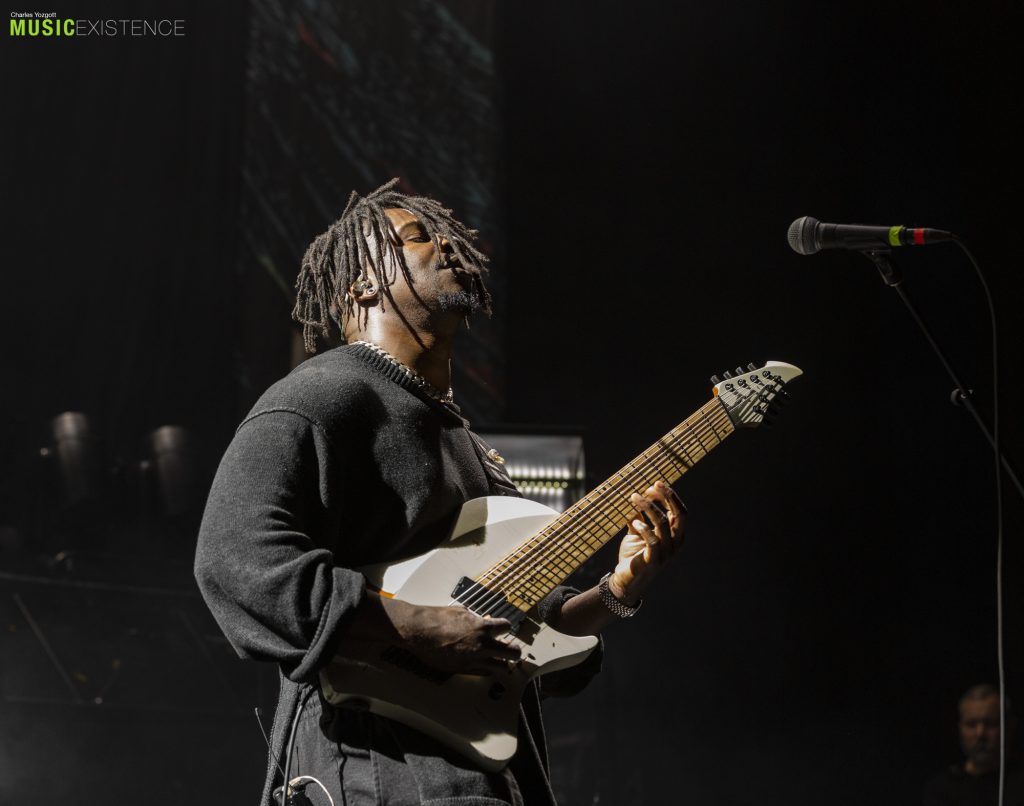 Animals As Leaders was up next and more and more people began filling up the theater. The trio from Washington D.C., consisting of guitarist Tosin Abasi and Javier Reyes, with drummer Matt Garstka, hit the stage and darkness filled the theater. As soon as the drums in the track “Arithmophobia” started the lights and strobes started going with the rhythm of the music. These guys are incredible musicians and watching then perform live is just as jaw dropping as listening to their art. The next four songs they played came off their latest release Parrhesia that was given to us in March earlier this year. “Gordian Naught”, “Micro-Aggressions”, “Red Miso”, and “Monomyth” are four tracks that each has a different vibe but gives us that classic Animals As Leaders djent sound that has become who they are. Their latest album is a work of art and once again shows the incredible talents of these three band mates. “Cafo” was the last track they played, which is off their self titled first album, and the crowd went nuts for it. One huge mosh pit was going on while fans everywhere in the theater was head banging and playing the best air guitar. This was the first night with The Omens Tour for Animals As Leaders and they definitely made it a memorable one. 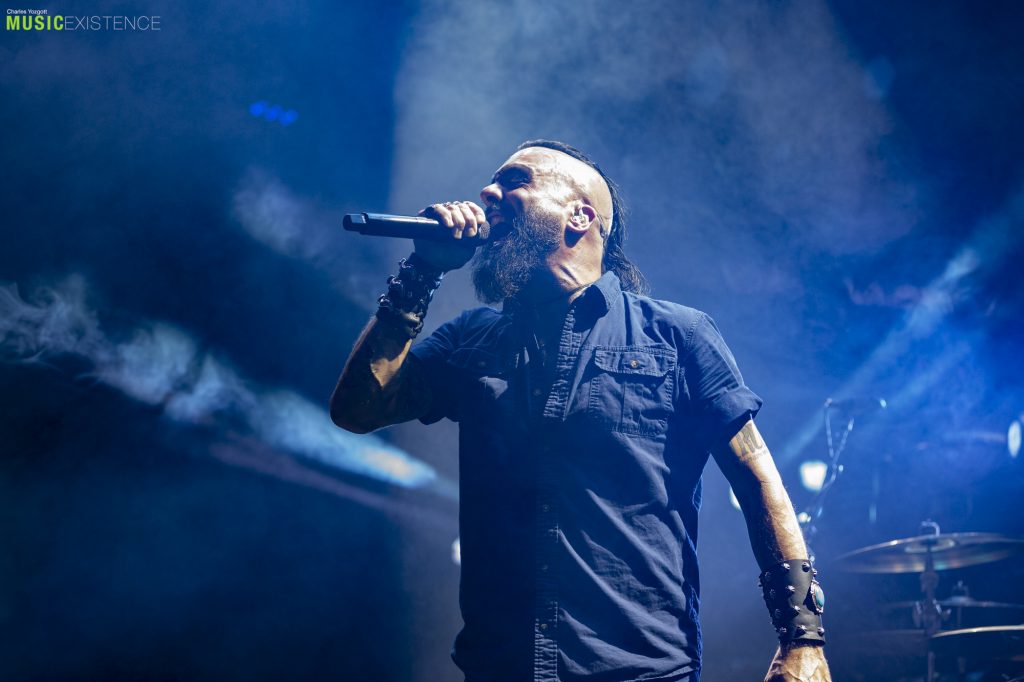 Metalcore heavy hitters Killswitch Engage, who call Westfield, MA home, have been the direct support for Lamb of God on this entire tour. By now the YouTube Theater is packed and fans were ready for this setlist that everyone knew would deliver, possibly something special as well. “Strength of the Mind” started with a big bang and just like that Killswitch took over the theater and fans were going crazy. “This Is Absolution” off of the 2006 album As Daylight Dies was next followed by “Rose of Sharyn” off of the 2004 album The End of Heartache, both huge hits and fan favorites from the Howard Jones era. Singer Jesse Leach does a stellar job singing Howard’s songs, as did Howard with Jesse’s songs, and to this day are good friends. Up next from the 2002 album Alive or Just Breathing, which put these gents on the map, was “To the Sons of Man” which goes hard fast and straight to you face, what a killer jam that turned 20 this year. “Unleashed” and “The Crownless King”  was next off of their latest album Atonement which was released in 2019 and soon to follow would be “Know Your Enemy” from the same album. Guitarist Adam Dutkiewicz had to remind the crowd not to slow down and keep the mosh pits going strong. He just wanted everyone to have as much fun as possible and he said “You know what’s awesome? FUN!”, and then they went into “Hate By Design”, the second track played off of the 2016 album Incarnate. 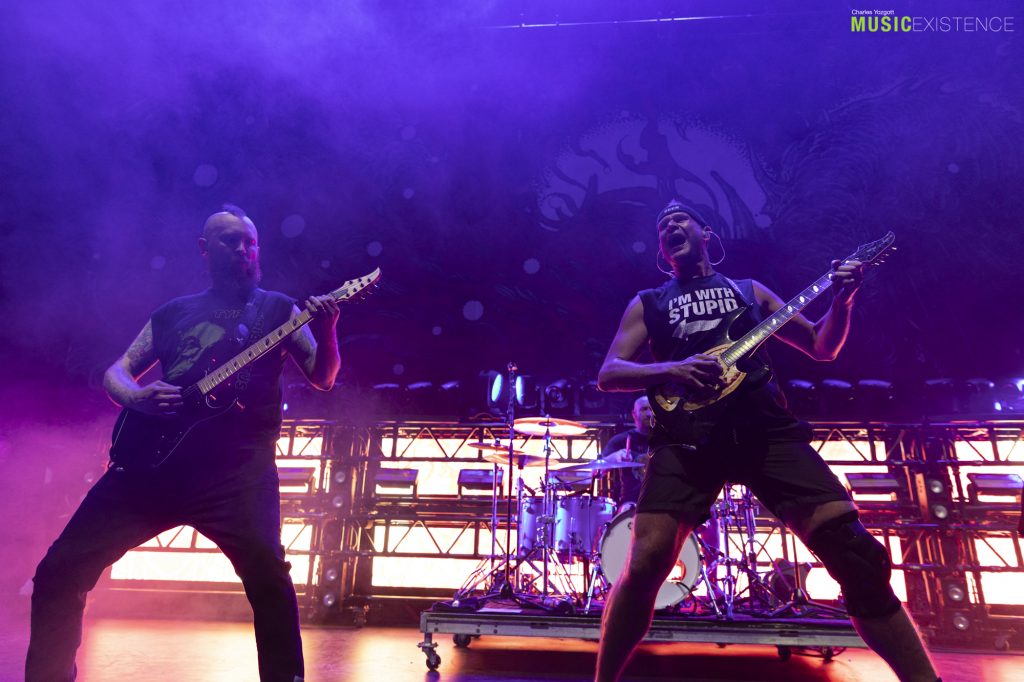 “My Curse” was next followed by a bonus track off of As Daylight Dies “This Fire” which the crowd loved. “The End of Heartache” followed and the entire theater was singing along. The lone track played off of the 2013 album Disarm the Descent, which is the first album that Jesse was back on, was “In Due Time”. The Dio classic “Holy Diver” was next and played to perfection while the crowd sang along. Afterwards, Jesse called out a special guest for this show and brought out none other that Howard Jones himself to join him on their song “The Signal Fire” off of Atonement. Talk about an energy booster! Guitarist Joel Stroetzel, bassist Mike D’Antonio and drummer Justin Foley go off as Howard joins them on stage and these guys look like they’re having the time of their life. What an amazing performance and set from Killswitch Engage. 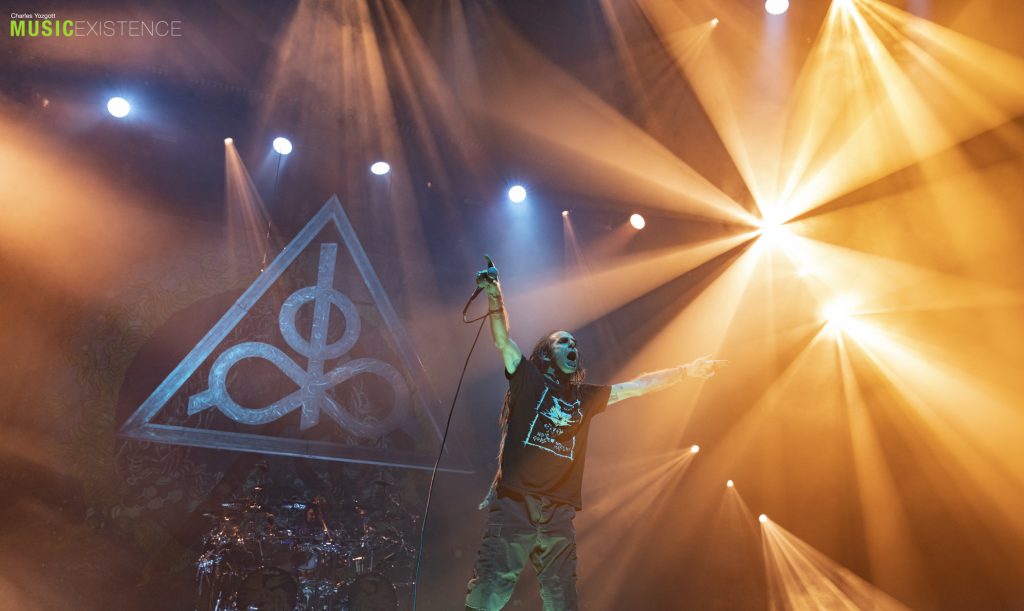 The anticipation in the theater grew as the crew on stage were setting up Lamb of God’s massive stage. A black drape covered the front of the stage from the ceiling so that you couldn’t really see what was going on or what the stage set up looked like. More than 5,000 people filled the theater and it became loud with cheers when the lights went down. The beginning of “Momento Mori” started and the crowd sang the opening part with lead singer Randy Blythe and the build up began. As soon as the entire band joins in on the song the curtain comes down and chaos ensues. An opening track on the 2020 self titled album Lamb of God was the perfect way to kick of their set. Their back drop had their logo hanging down in front of it with the art from their latest album Omens behind it on the actual backdrop. Bones in the shape of a triangle with the album artwork around it looked amazing with the light production they brought along. Big lights and theatrics came with the show and during their second song of the night, “Walk With Me In Hell”, they brought the fire. The massive popular track off of the 2006 album Sacrament showed what a professional pyro production can look like when it’s done right. The entire song had fire going to the beat of the song while the crowd moshed away singing simultaneously. Their 2004 album Ashes of the Wake, which is a fan favorite, was home to the next tack “Now You’ve Got Something to Die For” where the audience went even more nuts. The energy in the building was at a peak and you know that everyone there was having way too much fun. 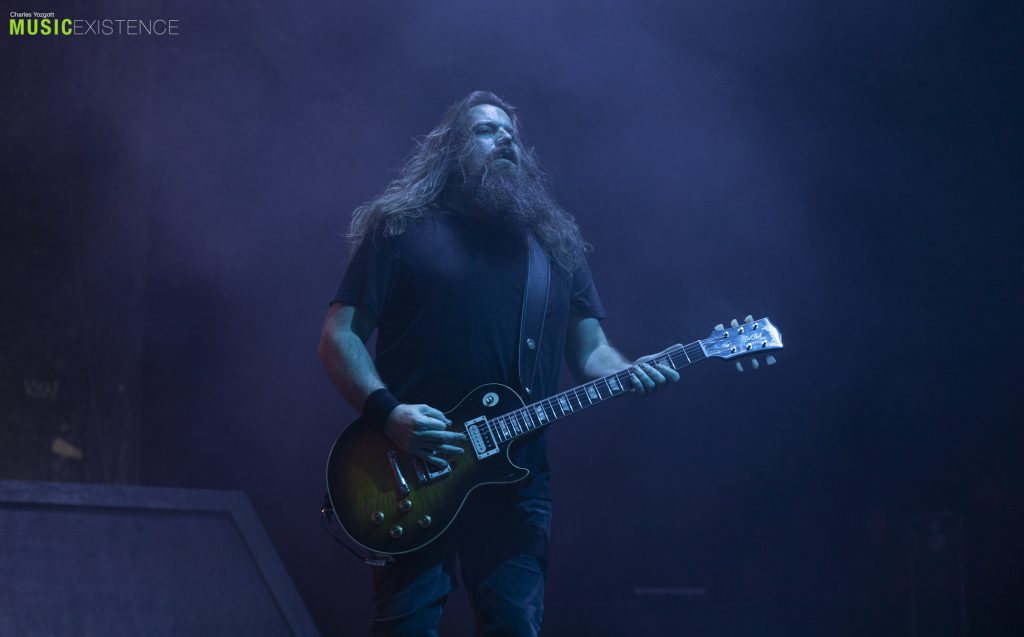 “Resurrection Man” was next and you could tell guitarist Mark Morton was having a good time. He was singing along and watching his frontman jump high in the air during the songs and you could tell he was just as amazed as everyone seeing Randy do the things he does on stage. The first single off their latest release, “Nevermore”, was next and the crowd continued their love and devotion to the band that they were waiting all night to see. Two tracks from LoG’s second album As The Palaces Burn was next, “Ruin” and “11th Hour”. It was nice to see that they put those songs on the setlist and still play the older stuff as smooth as ever. As soon as Randy said “Whoever appeals…” the crowd went berserk! “Omerta” started and fire followed with smoke shooting upwards between beats. This is one of the bands biggest songs and the crowd made sure that they knew that. The title track “Omens”, off of their latest album, followed and the way it sounded in the theater was similar to the album itself. On the record there’s a number of people singing the “Omens” chorus with Randy, just like the YouTube Theater did on this night, and hearing 5,000+ people sing with the band was a sight to see. Great energy and an overall positive heavy metal experience. 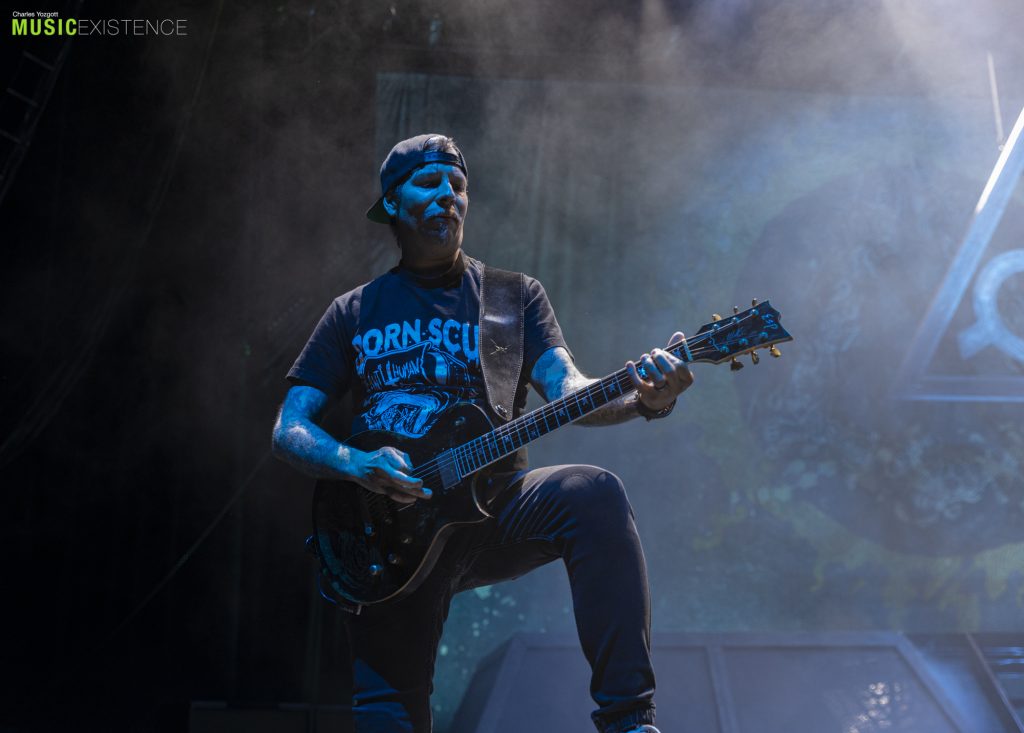 Randy introduces the band, who are from Richmond, Virginia, and says “except for the newest member of the band, drummer Art Cruz, who is from East LA!” The crowd went nuts and gave the local drummer lots of love. Art’s family and friends were there supporting him and it was a special moment when he was recognized while behind his drum set. The fast pace punk rock song “Contractor” off the album Wrath was next followed by “512” off VII: Sturm Und Drang. Willie Adler’s guitar riffs give life to the next track “Ghost Walking” off of Resolution and it was played perfectly. “Vigil” was next up and slowed the pace down just a bit. Bassist John Campbell sways back and for while his long white hair goes all over the place as he rocks out to the chorus on the song. These guys love what they do and keep up the energy throughout their entire performance. The last two songs of the night got the crowd moving again and “Laid to Rest” had everyone moshing again. This crowd was having a blast and enjoying every minute of the headliners set. They ended the night with “Redneck” as they have been and once again the entire crowd and energy was at its peak. This show and the entire tour was an amazing feat to witness and one can only hope that Lamb of God does another massive tour with today’s best metal bands. It’s amazing how this event brought a lot of people together to enjoy heavy metal music. Souther California definitely loves their metal. Be sure to check out all these amazing bands the next time they come to a town near you, you won’t regret it.

Fit For An Autopsy