Home / Interview / Army Of The Universe Talks Songwriting, Experimentation, & Being on the Road 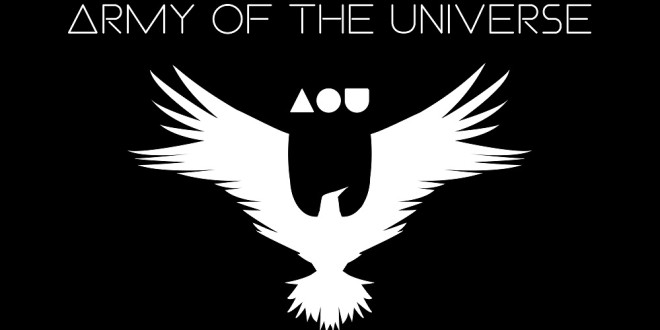 Army Of The Universe Talks Songwriting, Experimentation, & Being on the Road

Milan based Industrial trio Army of the Universe just dropped their The Magic and are set to independently release a full LP followed by North American and European tour.  We were able to sit down with the band and learn more about their creative process,  touring with Industrial legends, and evolution through experimentation.

What is the intended sound and image of Army of the Universe?  How did you all come together and develop your image and sound?

We intended the imaginary representation of what the future has always meant to us when we were teenagers: starships, space, big analog buttons, lasers, neon lights, a third World war, a war against aliens, invaders.

Sound wise we are experimental and diverse. The combination of electronica, real guitars and drums came from the original clash between DJ and Producer Trebla and Rock singer Lord K, the band founders.

The end result is a pretty crossover clash covered with industrial elements and sound design.

Tell us about your songwriting process?  How are you inspired to start a song and how does that develop from writing to composition, recording, and completion?

Experimentation has always played a big role in our writing. Inspiration normally comes after the first beats are written, together with some improvisation. We still go a lot for our stream of consciousness.

Of course we had a few songs where the idea or the lyrics were there already and then we built the whole track around it, but it is normally the other way around.

Is there a story behind the tracks on the Magic EP?

As always there is a story behind each single release. The Magic EP includes the single “The Magic”, then a brand new song “Really?”, and the previously unreleased “Acid Flows”. Each one comes with its own remix.

“The Magic” itself was meant to be a whole different song, the last one we were about writing for our previous album. For several reasons the song (which was meant to be called “The Last One”, in fact) never made it to the studio, so we decided to keep the most catchy line, cut a brand new riff out of the original guitar stems and here we go with “The Magic”.

How did you choose the remixers for the EP?  Can fans expect additional remixes on the new album as well?  Were there a lot of direction and expectations given to them or were they given free reign?

We did not really choose, it all came natural and organic. In 2014 we were on a Dim Mak tour with our DJ set and we met Deorro. We played a few shows together around Europe.

It was when we were redoing “The Magic” song.  Deorro wasn’t as big as he is now but it was clear he was a super talented EDM producer, an we asked him to remix it for us which he did. The only direction we gave was “keep it dark and raver”.

Then Gosteffects came on board because of a mutual friend. His remix of “Acid Flows” made us really curious and we chose him  as a co-producer for the new album.

“Really (Mut! Remix)” is done in house by Trebla and his old friend Max Savietto, a big hard dance producer.

What can fans expect from your upcoming album as a result of working with EDM producer Gosteffects?

The new album will be mad. Still experimental and diverse, indeed. Our identity is there, 100%,

but the sound got bigger and that is mainly because of Gosteffects. We needed someone who could translate our energy into sound design, and here he was! Gosteffects can produce any sort of music really, from EDM to Rock, from Ambient to Hip Hop. What really matters is that him and Trebla got along really well and shared a lot of their musical background. It all worked out perfect.

How do you describe the evolution of your sound from LoveDead to The Magic?

LoveDead was purely experimental. We did not really know where we were going back then, but it was fun and sounded good. The Magic is a more mature kind of work, with a more specific direction, but still consistent with our origins. The sound got bigger and more aggressive too.

You’ve toured with some major names like KMFDM and Skinny Puppy, what is the most important lesson you have to give new artists on their first tour?

To be professional and humble. Both these bands are real pro. If you think of their career and background you will be surprised to see how easy going and serious there guys are.

We’ve heard rumors of a potential Summer 2016 tour?  Any updates you can share?

Not yet but we are working on it. Planning the North American for August at the moment,

Europe will come in the Fall. We’ll keep you posted soon.

How is touring in the US different than in Europe?

It is very different. The US seemed to embrace our style way more, but we have to say that Europe, especially Northern Europe, has been growing a lot lately. The other big difference is “distance”. Europe is way easier to travel. When you tour the whole US you end up spending 50% of your time on a van or bus.

But we still love it.

What is one characteristic of each member of Army of the Universe that you can share with us?

Let’s start with lead singer Lord K. Guess what? He is mad. Lordie reads a lot, works out and he is the Lord of nonsense fun stuff.

Trebla has too much energy, always doing something.. we can’t take his adrenaline longer than one month.

Dave is the silent one, which is why we are all a little scared about him too.

Previous EP Review. Meagan Delima: Like You Do
Next Kanye Westís Next New Album Has A Title (coming this summer)