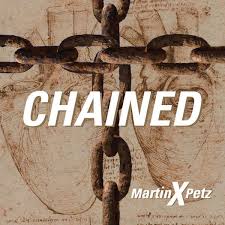 Martin X. Petz has slowly, silently building a reputation for himself. He’s made a name on the strength of his debut solo outing and now he’s poised to break into the bigger leagues with the release of Chained, his second record to date. Petz sounds like a country professional all across the 10 tracks of this album and he’s not afraid to mix sounds from the 40s/50s, the 90s and the 2000s. With his silky, honey-drenched voice, a talented guitar performance and an obviously understanding of the music that he’s trying to make, there’s no doubt that Chained is a grand piece of work. A few of the tunes could use tightening up, but Martin is just getting his feet wet in the industry and there’s no doubt that he’s learned a lot thus far.

The title track oozes cool and class with a nimble little acoustic guitar flourish that acts as a perch for Petz’s hefty crooning. He eschews a traditional Nashville croon for a soulful voice that is all his own as thump of bass, percussive restraint and anchored bass chords hold the foundation down. The lyrical approach seems to take a shot about a woman that cheated on Petz and now he’s unsure of what his next step in life is personally. Musically, he couldn’t be more sure-footed as he weaves his way around this gusty mid-paced swinger backed by gorgeous piano ambience. An upbeat, rock n’ roll fervor slinks its way through the veins of “They Say (You’ll Know)” which is the same kind of radio rock, Billboard friendly country that the airwaves have been peddling for over 20 years. If the songwriting was there, I’d say it would be a pass but with Petz’s no nonsense, dialed in approach the tune sticks to the ribs like peanut butter. Falling into the same mold “It’s Hard” substituted piano for brass as it dwells in an easily digestible, soft n’ easy contrary rocker with mariachi vibes; the chorus melody particularly shining bright with vocal harmony accoutrements and soothing guitars giving the song a good set of running legs.

“Kinship” draws down the sun with a mesmerizing ballad that melds shuffle percussion with well-timed, barren guitar chords conjuring up a forlorn atmosphere of loss. Martin’s voice is gentle and sweet; utilizing the softer, lower parts of his register to create one enrapturing melody after another. It tells an uplifting story of giving oneself to the lord whenever life is over. The mellow ebb n’ flow holds strong and true on “All that I am” where the acoustic guitar speaks as many volumes as the vocals do. Bass is employed as an auxiliary instrument, although the entire crux of the tune rests on Petz’s trembling vocals and flowing country/folk guitars. “Jesus Loves us so” relies on a constantly moving, foot-tapping drum performance to shake the walls with constantly driving guitars, passionate vocal stretches and the addition of horns to further color in the background.

Kicking tumbleweeds down Main Street in Dodge City “Run Ride Leave” lays into an insistent snare march backed by bubbling tom drums while the guitars intertwine the percussion with intricate threads of rustic melody. In this song, Petz shapeshifts his voice to the one of an old school, country crooner like Kenny Rogers, Marty Robbins, George Jones and Waylon Jennings. The song tells of a shootout between an outlaw and a gunfight with a sheriff. It’s the roughest riding song on the entire album and easily steals the show. “The Way” and “Jesus can you hear us” goes for a similar feel to that of “Run Ride Leave,” and while competent examples in their own right, they just can’t seem to strike the same raw material as “Run Ride Leave’s” dust-covered articulation. On the other hand, “The Way” is a mixed bag of old and new country standards with rollicking acoustic guitars paving the way for soaring pop choruses.
Chained could have used a little more time in the studio to edit out some of the rough edges. There are plenty of good songs to return to but unfortunately some of the results either fall flat or sound a little bit too alike to the tunes that came before. As it is, Chained should be a good time for country fans looking for a new artist to watch. Without a doubt Martin X. Petz will be a well-known name before too long.