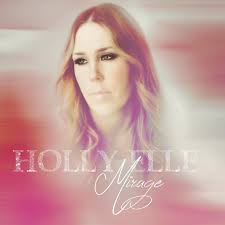 Though her bio says she is much more than pop and electronica and she has a varied and well-rounded sound regardless of “whether [she is] fronting a full throttle band, commanding a concert stage with electronic tracks or in an intimate venue accompanied by only an acoustic guitar,” I can only attest to Holly Elle’s latest single Mirage. Of the many ways in which she might perform, I would say that her latest work would be best as on stage with big speakers bringing her beats to the crowd. She puts together a very sexy pop song with some darker beats that make it smooth and give it a hint of sly soul as well.

Holly Elle has a very clear and powerful voice, she stays within an alto register which gives her voice a strong and weighty umph. The melody was enchanting and genuinely enjoyable to listen through. I found subsequent listens easy to do as I sat down to write this. She keeps a steady beat running throughout the song, but she adds in additional percussive elements that keep the constant beat fresh and exciting. I couldn’t quite put the pin down on her voice, but Holly Elle is somewhere in the vein of Kelly Clarkson, Christina Aguilera or even Beyoncé at times. All of those singers have that powerful alto voice that can really rock a listener; Holly Elle also brings her own version of that voice to the microphone.

As far as the lyrical content of Mirage goes, I can’t really complain, but I also can’t really say I was altogether impressed either. Let me clarify this; there is nothing wrong with it, but there is nothing original either. I don’t fault Holly Elle for this either. When it comes to such a well ridden theme, uncertain love, it is not easy to find something new to say. All you can do is look for a new combination of words, or a way to put a unique spin on it. I would say that Holly Elle succeeds in that endeavour. Mirages, shadows, silhouettes, are all great images to throw into a song which is about the uncertainty of love.

When I got to the end of the track, for the fifth or sixth time, I started thinking of the growing popularity of female vocalists within the dubstep genre. Personalities like Lindsey Sterling have managed to make huge breakthroughs in the, arguably heavy male listener base, with songs like her single Crystallize. With such a cry for female vocals and figures in the growing genre, I couldn’t help but wonder what it would be like with a song like Mirage in the mix. The connection felt natural as Holly Elle’s track had some nice electronic ornamentation and was leaning on the heavy side of the bass. Pushing the song a little further, amping up the bass and distortion of the electronic beats wouldn’t be such a stretch. I would be pretty keen to hear what that would sound like. Either way, the original is plenty good and well worth a listen.

Previous COCKSURE Delivers CORPORATE_STING
Next “Break Free” by Only On Tuesdays