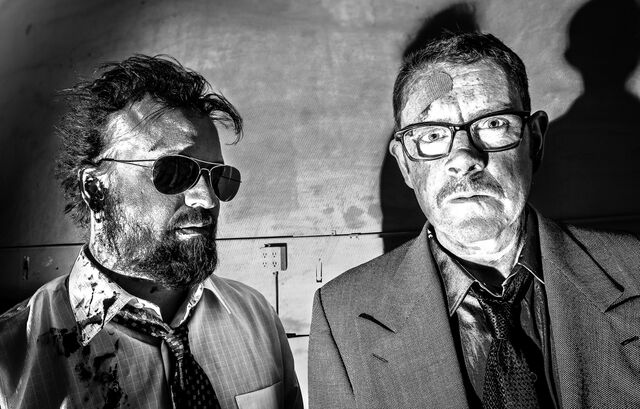 After COCKSURE offered three separate releases on three different labels in 2014, this year, the boys bring out another full-length LP CORPORATE_STING via Metropolis Records on August 21, 2015, one year to the date of their critically-hailed debut full-length TVMALSV.

Written and produced by Connelly and Novak at Cracknation Studios, Corporate_Sting lives low on the log of the seedy underbelly of society, taking aim at the exploiters, the thieves, the dealers and the corruptors, cranking up the heavy drums and the dirty bass while raising the ghost of classic Wax Trax!-era sounds, bathed in future horrors and catastrophe. The album includes a guest “memo” written by Duane Swierczynski, published author of Severance Package, The Blonde and a writer for the monthly Marvel Comics series Cable, matched with photography by Black Pearl Photo.

With Chicago as its backdrop, Chris Connelly has been a fixture in the industrial music scene there for the last three decades, best known for his hand in such luminaries as Ministry, Pigface, Killing Joke and, of course, Revolting Cocks, among many others. In addition to his musical fluidity, his revered memoir Concrete, Bulletproof, Invisible, and Fried: My Life As A Revolting Cock (ISBN 0946719950) which bares his legacy in the scene from his beginnings in Finitribe to his involvement in the multitude of bands to his solo career, launched its second edition last summer. Long out of print, the new revamped edition includes a brand new forward, more photos and graphics, additional stories and a new cover and will be available in eBook form read by Connelly himself. Electronic maven Jason C. Novak has been instrumental in leading DJ? Acucrack and Acumen Nation, as well as running seminal label Cracknation. Both being longtime residents of that city’s fertile music scene, it was only a matter of time before Connelly and Novak collaborated directly. “This is Chicago. We have been in each other’s orbits for years, but we first started collaborating when Jason organized the COLD WAVES festival,” recalls Connelly. “He was integral in getting Revolting Cocks to reform at that. I felt like it was time to move on from playing old Cocks material and create a new monster.”

Previous Mindz I – When The World Endz
Next Holly Elle – Mirage