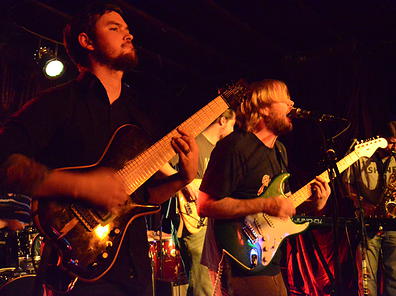 Gifting themselves as a joyfunk genre, it’s hard not to agree with them. CBDB makes you wonder how they got their name yet you know there must be a wild story behind it. Joyfunk is Dead is the album one would get once you’ve had a jam session lasting over several days even weeks, then someone says please hit the record button!

Causally the members Cy Simonton (guitar & vocals), Kris Gottlieb (guitar & vocals), Glenn Dillard (sax/keys & vocals), Donald Deloach (percussion), Paul Oliver (drums) and David Ray (bass & vocals) blend this unbelievable section of genres such as Jazz, Blues, Fast Rock and Up Tempo Pop that lives your head swimming in trying to understand…how can one band possibly capture all of the rich textures that make up each genre and deliver in full form.

The track ‘Fun Run’ shows off the talents from a harder rock precision that will have any alternative music lover rushing to listen in. Guitar solos are known to reel in an audience because the sheer adrenaline eruption feels contagious, spreading throughout the listener. Then ‘My Time’ comes on and it has a more solemn pace that can lead to a happier ending. It amazes me how kind of spontaneous this band is with their album Joyfunk is Dead. Because people tend to rely on consistency from one record to the next, where half the time the first three singles will sound dramatically too similar to the previous one. However CBDB tries on the different angles hat and trashes that idea, bringing in a whole new tradition. Sticking with the jam band session aspect, that’s why with each track it is so perfectly presented with this absolute mind blowing notion of ‘how much further can this band take it?’ Which is a fantastic question to ask while listening to any record, because ultimately that means a band is forever evolving towards a riveting sound that will have you keep coming back for more.

‘Numbers’ is a song on the album that starts off as this infertile punk smash beginning that easily slides into a recognition of the early Pop Punk era that dominated a lot of the late 90’s early 2000’s. Then almost coming to a halt, switches into a slower fusion where the vocals takes control and echo against the percussion. Gliding in with the Jazz saxophone aspect and it feels as if the song is two completely different takes patched together. Which is not a bad thing, it’s different, new and worthy of an intriguing listen through.

If you are looking for a far different approach listen to CBDB to gain knowledge of what can be done and changed within the music industry.