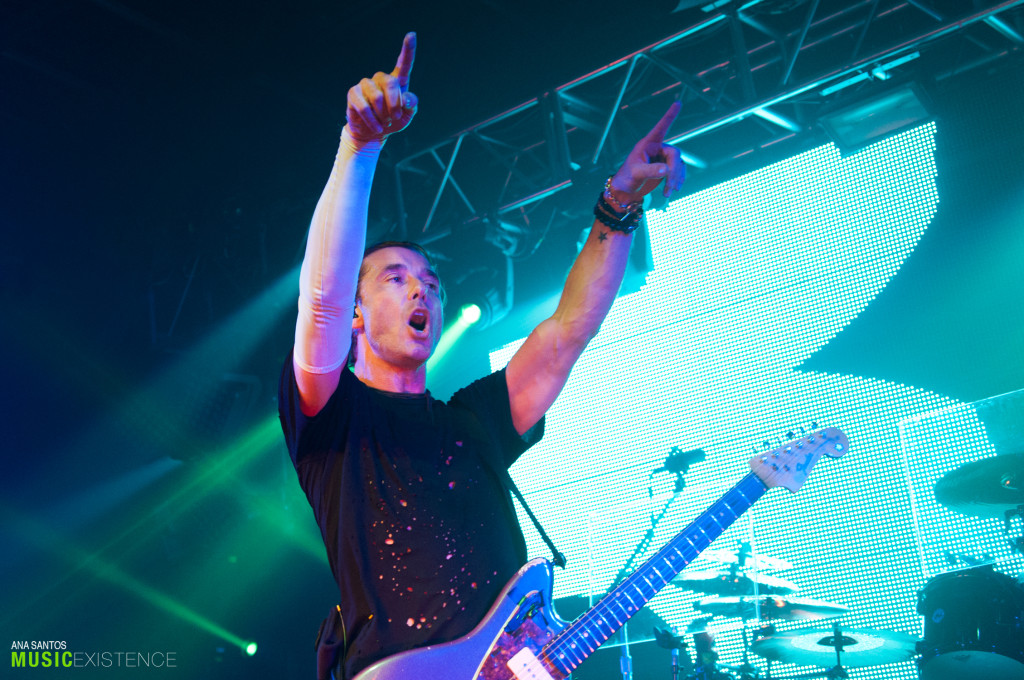 British rock band, Bush, is two months deep into a US headlining tour in support of their latest (and sixth) studio album Man On The Run. Standing in the midst of Sayreville NJ’s Starland Ballroom, which was palpable with a giddy anticipation, I admit–I was definitely sharing in that atmosphere of excitement. It brought me right back to my teenage years when Sixteen Stone (1994), Razorblade Suitcase (1996) and The Science of Things (1999) were on permanent rotation in my CD player.

Fast forward 15 years to a chilly, February evening in New Jersey and a hungry, cacophonous audience, what I found absolutely remarkable about Bush taking the stage, was the band’s fresh, eager, endless energy. This is a band with a twenty-year career under its belt, including, but not limited to an incredible amount of worldwide success. It’s safe to say that Bush is one of the most accomplished bands to come out of the 90’s grunge movement, fully capable, even today, of nailing radio hits as it once did prior to its eight year split. There was beautiful abandon in the way they performed; eager to give back to the fans that supported them over the past two decades.

Bush played a long 19-track set, clocking in at almost two hours of non-stop rock. The setlist was perfectly balanced, featuring some old classics like “The Chemical Between Us”, “Swallowed”, “Letting The Cables Sleep” and several tracks off their latest release Man on the Run like “This House is On Fire”, “The Only Way Out” and “Eye Of The Storm”. Bush kept the audience engaged and singing along throughout the night with video screens flashing up the lyrics to the newer songs.  An obvious favorite was “Everything Zen” – a song that incited the first few crowd surfers of the night and saw frontman Gavin Rossdale deliver a tight guitar solo on his knees at the front edge of the stage. Engagement was key. Bush is a band that obviously likes to interact with its audience–evidenced in the way Rossdale climbed down onto the floor to perform “Little Things,” weaving his way through the fans, who sang along and joined him in one crazed, jumping dance party in the center of the floor.

And as though capping off the main set singing on top of one of the venue’s side bars wasn’t a remarkable way to finish off the night, Bush came back for a four-song encore of “Machinehead”, “Once In a Lifetime” (Talking Heads cover), “Glycerine” and “Comedown.”

Bush is a group that is genuinely enjoying their time on this tour–their energy is impressive, their sound is spot-on and Rossdale proves that he still has what it takes to sell out a US tour and remain relevant on the airwaves. With a few more dates taking them through mid-March, and festival appearances coming up in the spring and summer months, Bush is definitely one to check out. Even if you haven’t kept up with the band’s latest work, their live show will pull you in.

Check out our photo gallery here.