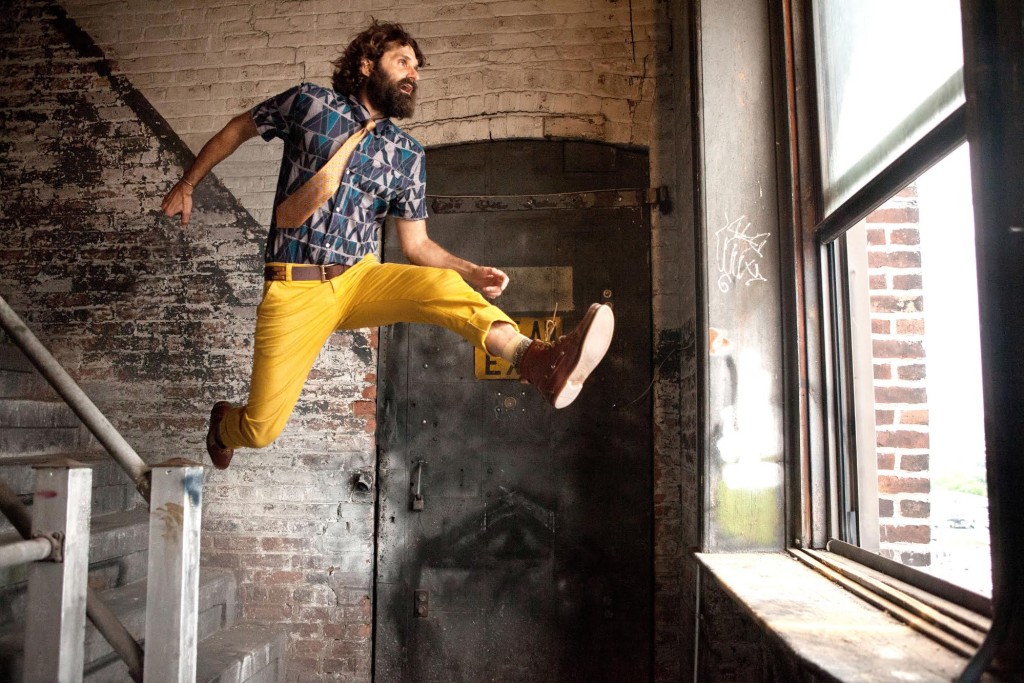 Take a stroll through New York City, and you might find yourself in an alternate universe where flashers are kings, ice cream thievery is the norm and Starbucks latte stains are the latest fashion. Or you might have just wandered onto the video set of up and coming Brooklyn musician, Bay Uno. Initially starting out as a friends-only performer, Bay Uno’s unique folk-inspired sound has created quite the buzz with his latest single, “Wait For Your Love.” Combining bittersweet lyrics with a prank-filled music video gained the musician praises from Entertainment Weekly, The Huffington Post, and singer-songwriter, Sia. On March 10, Bay Uno will release his debut album, Catalina, a record inspired by the different bodies of water on an Island off the coast of California. In an interview with Music Existence, Bay Uno discusses his journey from “bedroom musician” to recording artist, touring Scandinavia, the inspiration behind Catalina and the dark-humor that fueled “Wait For Your Love.”

ME: You initially began your career as a self-proclaimed “bedroom album artist” – creating music but rarely playing for anyone other than close friends. What made you decide to take that next step and transition from the bedroom to the stage?

Bay: I slowly started to play the songs for my friends and they’d tell me the songs were good, but you know, your friends are supposed to say that no matter if [the songs] are good or bad. So I didn’t know if there was really anything there, but my friend, Matt [Whyte], who is a record producer, was like, “This is good. Your songs are good. We have to record them.” So we recorded a song and it came out good, so we started to record more songs and shared them with even more people.

ME: What challenges did you face on your journey from private, friends-only performer to preforming at shows?

Bay: One thing I learned about myself is that I love performing, and I never knew that about myself. The first time I got up in front of people, I was really nervous. I always get really nervous when I perform in front of people, but once I’m on stage, I open up and I have the best time. The challenge was actually getting up on stage and performing, booking shows and realizing that I have something to offer, and that it’s my duty as an artist to share that because if you don’t share it at all, it’s a waste.

ME: Bay Uno is still a fairly new act, and you’ve gotten quite a bit of buzz with the release of your first music video, but initially how did you get your name out there? What did you do to promote yourself?

Bay: I didn’t really do a lot. I just played a ton a shows, and I do a little bit of promotion with Facebook and Instagram just to keep up with social media, but playing shows is mainly how I’ve been promoting myself.

ME: What was the experience like the very first time you went on stage and performed for an audience of people who weren’t solely your friends?

Bay: My very first show was at Mud Café in the East Village [New York City] and a friend was booking there and she asked me to play and I told her I didn’t want to do it, but she just kept hounding me, so I did it and it was fantastic! Everyone loved it and it was just so fun. It was the first time I’d ever gotten on a stage, but that was also the moment I realized I loved to perform.

ME: Were you performing your own completely original music or doing a mixture of your songs and covers of other artists’ songs?

Bay: It was just my own original songs.

ME: These original songs, were they completed songs that would eventually make it to your upcoming debut album, or where they songs that, at the time, were still works in progress?

ME: You’ve been touring since May of last year, and while most of your shows have been throughout New York City, you’ve also ventured to Denmark and Sweden. That’s a huge jump. What led to Bay Uno performing in Europe?

Bay: A lady came to one of my shows in Brooklyn and she liked the performance so she invented me to play a festival in Sweden. We go booked for this festival and we just booked shows around that. We had a mini-tour of Scandinavia and people in Europe love music: they show up, they come to the shows, they listen, they pay money, they’re really appreciative. It was really a great experience, and I hope to back to Europe again this year.

ME: How was the experience similar and different from performing in your own your home turf of Brooklyn?

Bay: People in Europe really appreciate music. In New York everyone is busy, there’s so much going on, there’s so much saturation of entertainment, so I think it’s a little difficult to get people to come out to shows. But in Europe, the venues are really nice, they pay you, they promote the shows, they make sure people show up. They just love music in Europe and I appreciate that.

ME: Bay Uno sounds like nothing out right now: you’re folksy, you’re very whimsical. What inspires this sound?

Bay: I’m not sure if I can point to one or two things that inspire my sound. When I set off to record and make music, I didn’t have any objective that I was going to create a certain sound; it just happened organically. I just had these songs that I wrote, I teamed up with Matt White, and created a sound that’s uniquely me, and that’s why I’m so proud of this record. Everyone that knows me says, “oh man, that is so you.” It’s a very Bay creation.

ME: Since you have a very unique sound, have you been surprised by the positive reception of your music?

Bay: Yes! I had no idea that I would be creating records and going on a tour and making music videos. I’m just a self-critical person. I doubt myself a lot. I’m constantly beating myself up for a lot of things. It’s a constant struggle to pay attention to what’s going on and what seems to be going on is that people are responding to this music and it pushes me to do the next steps I need to do music-wise. So it’s not surprising, it’s just something I never thought I’d be doing. I never thought of myself as a musician. I never studied music. It wasn’t my thing growing up. I picked up the guitar maybe ten years ago and fooled around with it, but I never viewed myself as a musician until recently.

ME: Since you never thought of you self as a musician until recently, how has this experience so far helped shaped you as Bay Uno, the musician?

Bay: I don’t know what I did. I don’t really know yet if this is my style. The next record I make could be a hard rock record or a dance record. This type of music is what I listen to next. The style comes after the words and the feel, and that’s what I’m trying to express, and that just sort of happened naturally.

Recently you released a music video to your single, “Wait For Your Love.” Listening to the song and watching the music video there’s almost like two different messages being portrayed. What is the story behind the music video?

Bay: There’s no humor in any of the songs on the record. They’re either sweet love songs or sad loss of love songs, but there’s no comedy. And anyone who knows me, knows that I’m a funny guy. I’m always cracking jokes. I’m just not a serious guy. So I didn’t want to make a serious video on top of a serious song because I didn’t want to be so dramatic. There’s just always a danger of being overly dramatic when making anything serious like that. So I told that to the director and he came up with this idea of me doing silly pranks around the city, and to just be bitter about a breakup or something.

ME: As I was watching the video, I didn’t know what to expect since the songs starts off very somber, but as it went on I found myself cracking up.

Bay: (laughs) Yeah, I definitely love the video. I couldn’t be happier with it. It really expresses me as a guy who is really mischievous, funny and I also have a dark side. I mean, I would never do any of those things in the video (laughs) but that sort of dark side that I think we all have. And then ending up in the fountain with the water, I’m a really big water person, so it was just perfect.

ME: The music video has gotten a pretty nice reception: it debuted on Entertainment Weekly, The Huffington Post wrote an article on it, and Singer-Songwriter, Sia, publicly praised the video on Twitter. What was your reaction to the love for the video, especially from a fellow musician?

Bay: It’s fantastic! I just love that people are watching [the video]. I could get excited when a famous person acknowledges me, but the thing I like most is that people are loving the video. I like the reaction, so it’s really great. And I didn’t really expect to have that kind of reception with it being on Entertainment Weekly and everything, but it’s really nice.

ME: On March 10th, your debut album, Catalina, will be released. You said previously that you’re a really big water person and Catalina has water-based themes as well. Was that intention?

Bay: Well, I didn’t set out to make a water themed album (laughs), but as the songs were coming together, I realized that they all had this theme of water. That makes it perfect because anytime I just into a body of water, I just feel reborn and alive, so that’s just the theme of the record.

ME: The album is also inspired by certain parts of California. So what leads a Brooklyn-based artist to write an album largely inspired by California?

Bay: I grew up in Los Angeles. I lived in the Bay area for many years, and that’s where I’m from, that’s where a lot of my memories are from. That’s just where my heart is so I feel like I was calling upon California for this record.

ME: Is there a particular track on the album that stands out as your favorite?

Bay: There’s a song called “Don’t Come Around Here” that is really good. I really love it. There’s going to be a video for that.

Bay: I hope to play a lot of shows and tour around a lot.

Where: The Living Room

Credit to Ben Heller for the phto