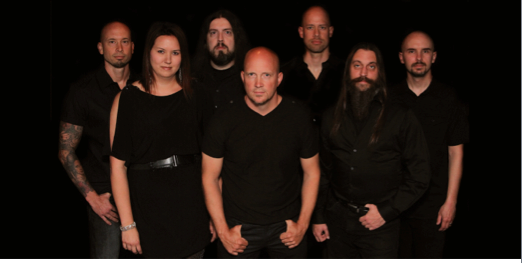 Virginia’s long running epic metal legends WHILE HEAVEN WEPT are commemorating their 25th year with the release of their sixth full-length album, Suspended At Aphelion.

Scheduled for release in North America on November 18th, the physical release of the anticipated album will be issued by Metalville Records while the digital version will be made available via Nuclear Blast.

Undoubtedly their most ambitious, epic, and progressive album so far featuring a single track divided into 11 parts, Suspended At Aphelion is performed by the entire Fear Of Infinity line-up as well as several esteemed guests, including FATES WARNING alumni drummer Mark Zonder and co-founding guitarist Victor Arduini – uniting two eras of FATES WARNING for the first time ever.

Guitarist, keyboardist & songwriter Tom Phillips states, “We all have dreams, aspirations, and desires. Most of us pursue them with passion… with all the strength, faith, and hope that we can find inside of ourselves. Unfortunately, sometimes this isn’t enough, and we ultimately have to come to terms with that which is unreachable. Suspended At Aphelion is the story of one such dream, but it will resonate differently for each listener.  We all have our suns that remain untouchable.”

Twelve years after creating their classic album Of Empires Forlorn together and solidifying an already strong team for their most epic of epics, the group reunited with producer/engineer Kevin “131” Gutierrez (RAVEN, DECEASED, DYSRHYTHMIA) at Assembly Line Studios in Vienna, Virginia for the recording of Suspended At Aphelion.

Suspended At Aphelion is currently available for pre-order at the following digital outlets:

Stephen Vicino is the founder of MusicExistence.com. He created this site to give talented musicians a voice and a way to be discovered.
@@svicino
Previous SHARON OSBOURNE AND COOL BREEZE CONCERTS PRESENTS OZZFIESTA
Next THE WILD BEYOND RELEASE NEW TRACK ‘REFLEX DRIVER’ LISTEN NOW