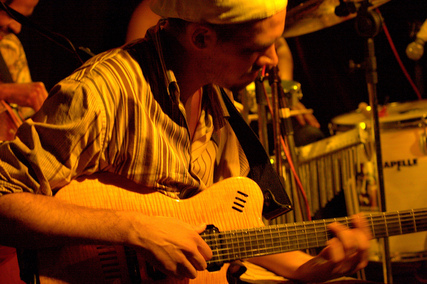 Born in Switzerland and raised in Rio de Janeiro, Lars Rüetschi is a brilliant and talented musician that dabbles in rock, jazz fusion and world music. For almost two decades, Rüetschi has been active playing for different musicians. While Rüetschi has appeared on several albums over the years, he’s also managed to crank out several digital singles.

Most of Rüetschi‘s work is influenced by the samba and bossa nova music, both of which he grew up listening to. Listening to his music, you can certainly here that influence. Take “Mediterana” for instance: it’s a very Brazilian sounding sound with some soothing flamenco-like guitar playing. Speaking of which, Rüetschi is an impressive guitarist. This is showcased in all of his music, especially the echoing “Nostalgia.” The song features Rüetschi playing at an impressive speed. Not only is it melodic but it’s also very calming. If any hint of rock can be heard in his music, it would be the piano-driven “Talking.” Half-way into the song, Rüetschi plays a solo that could be mistaken as a lost outtake from a late-1980s Pink Floyd album. The similarities between Rüetschi’s playing and David Gilmour’s are quite astonishing.

Lars Rüetschi is well worth checking out. With independent music being mostly dominated by alternative and lo-fi band, Rüetschi sticks out for his sound alone. –Aaron Conn

Check out Lars on iTunes & Amazon.

Stephen Vicino is the founder of MusicExistence.com. He created this site to give talented musicians a voice and a way to be discovered.
@@svicino
Previous Ben Watt To Release Golden Ratio Remix EP on November 17th and Announces US Tour This December
Next New Music Video For Saranto’s ‘Believe’