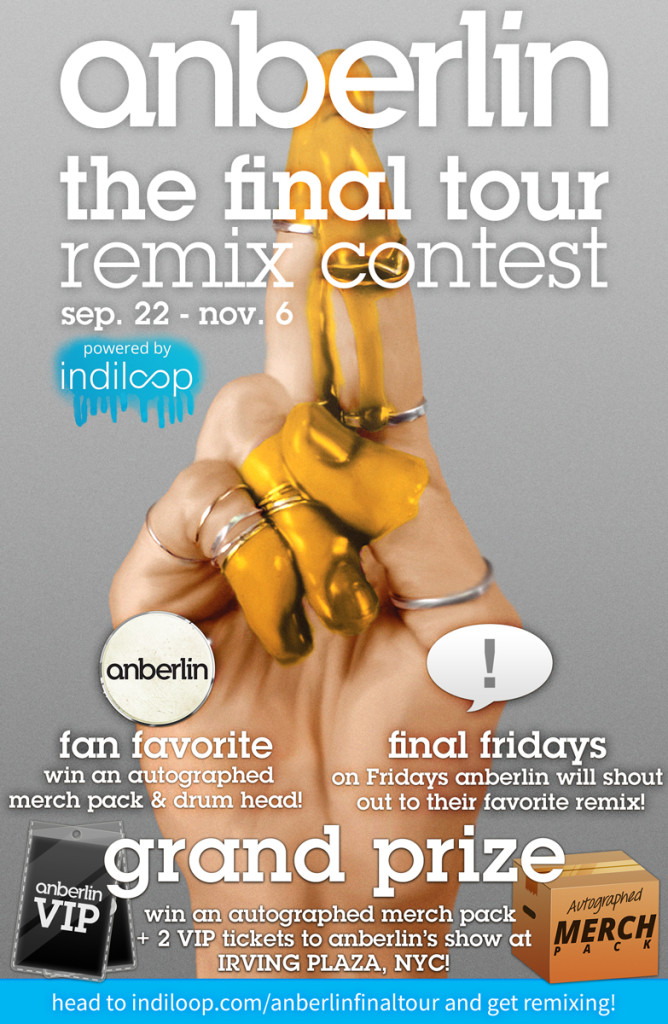 Anberlin is excited to announce their Final Tour Remix Contest,as well as their Design A Poster Contest. To enter the Final Tour Remix Contest, fans can log onto Indiloop.com/AnberlinFinalTour and create their own unique remixes from Anberlin’s extensive catalog. The contest will run from today, September 22nd, to November 6th, with the band picking their favorite remix each Friday and giving it a shout out on their digital channels, putting their fans in the spotlight and thanking them one last time for their support. Prizes include two VIP Tickets to one of Anberlin’s 2014 Irving Plaza NYC concerts, an autographed drum head, and assorted merchandise autographed by the band. For more information, please visit http://www.indiloop.com/anberlinfinaltour.

To enter the Design A Poster Contest, fans can upload their designs to creativeallies.com/contests/991-design-a-poster-for-anberlin. The contest runs from today, September 22nd, to October 7th, and the winner will receive $500 as well as a signed copy of their poster as part of a limited edition print run.

Indiloop.com is a cloud based remix software that has been described as ‘the Instagram for music creation’. Users can drag and drop stems (isolated instrumental or vocal tracks from any given song) into the mixer, then share their creations on social networks. Anberlin is the newest addition to Indiloop’s library of stems from various artists, and Tyson Paoletti, Director of Marketing for Anberlin’s label Tooth and Nail, says “We’re excited to be exploring new ways to engage our fans, Indiloop’s proven user-friendly platform was a no-brainer for us. Anberlin wanted to thank the fans in an authentic way for 12 years of amazing support, and handing their music to the fans is about as personal as it gets.“

Creative Allies was founded by Sean O’Connell, CEO of Music Allies, a top secret agency that handles strategy, marketing, publicity and radio promotions for music festivals and independent labels. For the last 10 years, Music Allies has helped musicians release their music independently by providing artists with opportunities that were traditionally reserved for major labels. Now with Creative Allies, Sean and the team are following their passion to promote creative individuals. “Our goal for Creative Allies is to give artists access to creative opportunities and, by doing so, expose their talents to the world,” says O’Connell.

Anberlin released their new and final album, lowborn, on July 22nd, 2014, and charted at in impressive #1 Alternative and #6 Top 10 overall on iTunes. The band has recently been featured on the likes of A.V. Club, USA Today, and Billboard.com around the release. lowborn brings Anberlin full circle as it has been released via Tooth & Nail, the first record label to which Anberlin was signed. For more information, please visit: www.anberlin.com.

Consisting of Stephen Christian (vocals), Joseph Milligan (guitar), Deon Rexroat (bass), Nathan Young (drums), and Christian McAlhaney (guitar), Anberlin have been a band for 12 years. The rock group formed in central Florida in 2002 and have released six innovative and sincere albums that have affected fans in deeply emotional ways. lowborn is the band’s seventh and final full-length.

Each musician has plans for the future after Anberlin, some concrete and some vague, some musical and some not. Those plans, in various ways, will be revealed in the coming months. For everyone, this is a celebration of what has been achieved rather than the mourning of a loss. “This is the end of an era of my life,” Rexroat says. “A long and great era. It also means a new beginning. It’s overwhelming to think about filling all my time with something new, but it’s also exciting.”

Stephen Vicino is the founder of MusicExistence.com. He created this site to give talented musicians a voice and a way to be discovered.
@@svicino
Previous SPIDERS to Release Shake Electric on November 4
Next Interview with Polar Echo 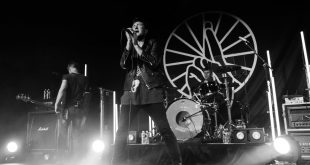 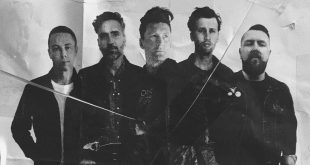