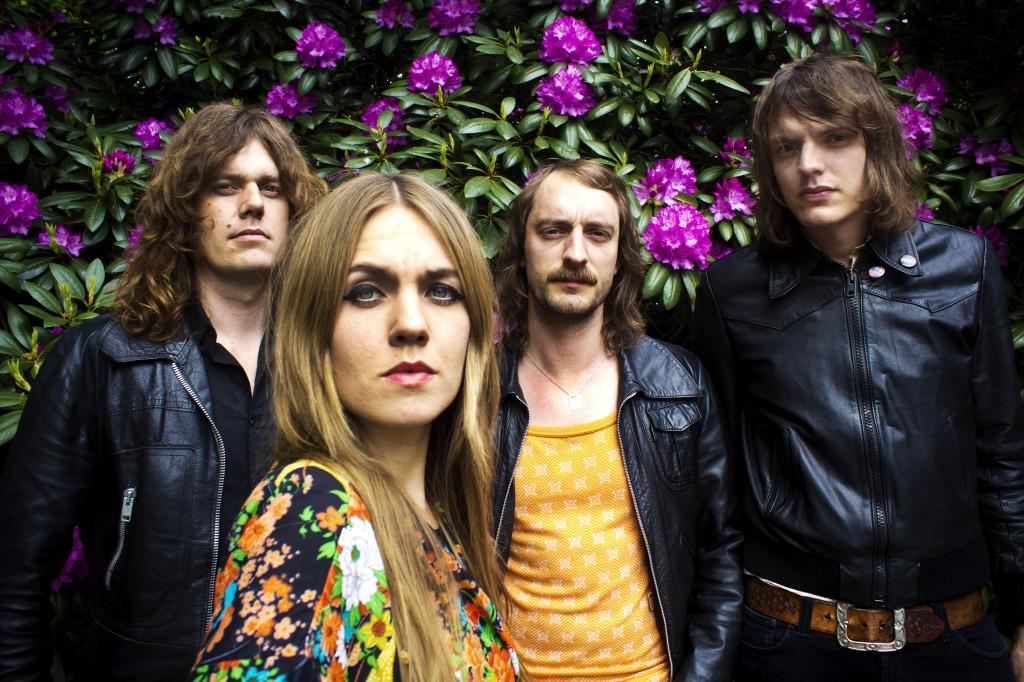 Are you ready to rock? Female-fronted Swedish rockers Spiders will be sure and answer the call. Spiders, who traffic in a retro, ’70s-inspired hard rock sound that also has uniquely modern vibe, will release their sophomore set Shake Electric via Spinefarm Records on November 4.

The band has offered the first taste of the album by premiering the video for the title track at Brooklyn Vegan. The song will be available as an instant grat track when the iTunes pre-order launches in the U.S. on September 30.

The band is fronted by charismatic singer Ann-Sofie Hoyles, who is in possession of a haunting, unforgettable voice and a beautiful visage, who had this to say about the title track: “‘Shake Electric’ is a rock song about me and my old friends that I used to have so much fun with, partying until the break of dawn. Tons of memories and emotions from several years resulted into this song, which has a theme that I think most people can identify with. Carolina, the female character in the video, is actually one of the friends I was inspired by when I wrote ‘Shake Electric.’ So it was great that she could be in the video!”

For Shake Electric, which was recorded in the group’s hometown of Gothenburg with producer Mattias Glavå (Dungen), the band has built upon the primitive metal-punk hybrid base of their debut and the result is a fiercely executed, decidedly classic rock and thoroughly turbocharged album with echoes of T-Rex, Ziggy Stardust-era David Bowie and Heart.

Choirs, acoustic guitars, piano and various percussion patterns come together to create an infinitely stylish yet never polished sound. On Shake Electric, Spiders remain raw, vital and visceral, and you can feel the rush of blood and rock coursing through every song’s veins. On this album, all members were involved in the songwriting process, which would explain a broader, more diverse and multi-dimensional sound this time out.

“We wanted to move on and find new paths,” said John Hoyles, who, up until now, was Spiders’ only songwriter. “What we like about many of the records from the 1970s is that they are often heavy yet soft. A really tough riff can be followed by a beautiful piano.”

“Even when we started, we were like a bunch of teenagers in the rehearsal room and despite jobs and girlfriends, we always accepted every show we got. We really love this life,” said Ann-Sofie Hoyles. “We have such a stronger vibe today and can really lean on each other in an amazing way. I am very proud of what we have accomplished with Shake Electric.”

Stephen Vicino is the founder of MusicExistence.com. He created this site to give talented musicians a voice and a way to be discovered.
@@svicino
Previous Drama Club Announces UK Tour Dates With Black Veil Brides
Next Anberlin Puts Fans Behind The Wheel For Their Final Tour | Announce Final Tour Remix Contest on Indiloop and Design A Poster Contest