In the time leading up to pre-production and the recording of their forthcoming album, Masks, Eyes Set To Kill decided instead of pandering or worrying about expectations, they would hunker down and demo two of their strongest new songs, the irresistibly “True Colors” and “Nothing Left to Say”.  Both merged anthemic scope and jarring metallic elegance, making for some of the group’s catchiest fare and as a result, they joined forces with Century Media Records for their fifth studio album.

“Those two songs served as a blueprint for the entire record,” explains singer, songwriter, guitarist Alexia Rodriguez. “When we were writing, I didn’t try to do what everybody else does. We didn’t need to throw a ton of riffs into one song or get overly technical. I wanted to make music that was catchy.”

With that mindset, the group retreated to a Southern California studio with producer Steve Evetts [The Dillinger Escape Plan, Sepultura]. In the process, Alexia evolved immensely as the band’s songwriter, and the band’s patented sound expanded. For the first time, Cisko added staggering screams and vocals, building the harmonies and everything became amplified from the heaviness to the hooks.

Stephen Vicino is the founder of MusicExistence.com. He created this site to give talented musicians a voice and a way to be discovered.
@@svicino
Previous JOLLY reveal moving new video for ‘As Heard On Tape’
Next Moving Mountains Post New Live Video and Launch Pre-Orders For Self-Titled LP Out September 10 on Triple Crown Records 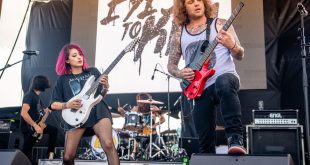