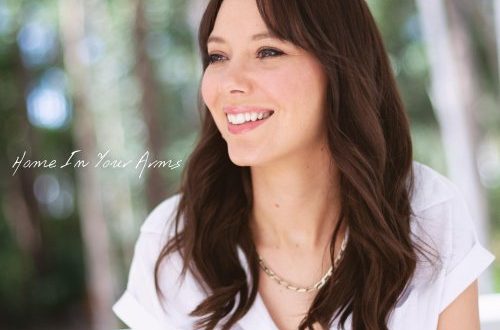 I confess having never heard Hannah until her new single “Home In Your Arms”. The Australian born singer/songwriter is new with one past single to her credit, “Unlikely Two”, and the exponential growth from that outstanding track to this one serves notice that Hannah will be with us for a long time to come. I began listening to the track expecting yet another love song pop confection that’s enjoyable with little depth and my ears perked up with surprise when the acoustic guitar begins the song.

Hannah adds a dollop of electric to go along with the acoustic and, when her voice comes in, I wasn’t really reminded of her innumerable predecessors in the genre, particularly female singers. Instead, I felt impressed that she merged a dollop of rock music aesthetics such as the aforementioned guitars with strong drumming before laying her folk-singer type voice over such an arrangement. It doesn’t always work. It does here.

You can tell she isn’t pandering for any specific audience. This is a songwriter and singer creating for herself first and foremost hoping that the listener will follow along. She encourages listeners to stick with her because she writes from a place of unfettered honesty without any of the standard tropes of the typical “relationship” song torpedoing her ambitions. The lyrics are full of compelling moments though she has a keen sense of how balance that against the arrangement.

I believe she also is smart to never go where the listener cannot follow. A big reason why the lyrics work so well is, naturally, because of her voice. Hannah’s voice brims with folk influences, without question, but there’s understated soulfulness as well that suggests she can handle a wide variety of material. We’ve barely scratched the surface of her gifts. Her sense of timing is likewise impeccable.

The production deserves fulsome praise. There isn’t a single instrument overpowering another and everything is in its proper place, but how the production blends her voice into the overall framework is an impressive achievement. Hannah is a creative force clearly devoted to her art and determined to spread the word about music’s value to anyone who will listen. “Home In Your Arms” is the clearest expression yet of her faith not only in music, but herself.

Someone like this cannot be deterred. “Home In Your Arms” weaves a spell from the outset and never rushes towards its inevitable conclusion, yet there isn’t a listener out there who will be bored with its pace. She isn’t afraid to write about the inner chambers of her heart and describe the scars, joys, and fears lingering there. We don’t have enough of this in modern music, at least not enough of this sort of thing gets the exposure it deserves, but she’s putting herself out there. This may sound like a “simple” little song when you hear it, but the time, effort, skill required to compose “Home In Your Arms” couldn’t be clearer. I responded to it in the first few seconds and believe many more will as well.

Previous The Ins and Outs of Concert and Music Festival Photography: What You Need to Know
Next Single Review: Drew Mills – “Emerge”