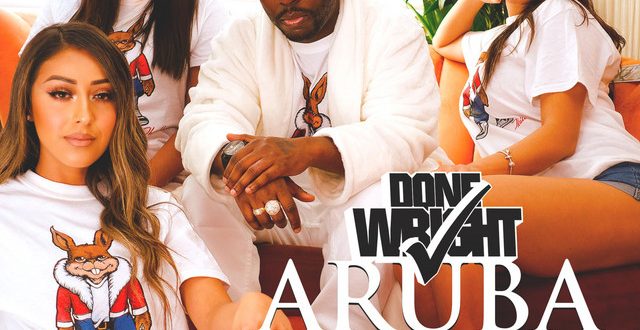 Clearly and definitely on the more cosmopolitan end of the pop spectrum, the beat in Done Wright’s “Aruba” is an undisputed focal point from the moment we first make contact with it forward. “Aruba” is a brawny hip-hop track, and while its bassline is no less a beast, the percussion tends to be the heaviest hitter in the instrumental setup. Wright makes it no secret that he has a penchant for issuing sonic brutality in this latest offering, which despite being a bit of an introduction to his sound has made me a fan of his style at any rate.

Beyond the grooves in “Aruba,” the duel between the melodic vocal elements and the sturdy rap attack creates a contrast that leads to rich tension on the other side of the song’s first half. Done Wright doesn’t let this tension go to waste, it should be noted; he rides the rhythm into the crunch of the bassline and makes every inch of pressure in the background an extension of the mood he’s imparting to us through his lyrics. It’s multidimensional songwriting for certain, but not the sort of arrogant nonsense that has become a rather frequent occurrence in the American mainstream lately.

Wright is rather guarded with his words in a couple of different instances here, but the fluidity of his performance – specifically the delivery – suggests a depth of artistry that has the potential to bring him a lot of success in the future. He’s still evolving, that much is clear even at a distance, but the melodic underpinning in “Aruba” alone is evidence of an experimentalism that will grant him a lot more credibility among the critics in years to come. This is a risky look, but his confidence ensures that none of the music ever sounds too left of the dial.

If this is just a sample of the talent that Done Wright is working with as a recording artist, his name has only begun to enjoy the kind of spotlight it’s going to get as he builds up his discography. “Aruba” has a clandestine swing that will leave anyone aching for more of its gargantuan, colorful grooving, and although it’s a shorter song – three minutes and change – it never feels like a teaser look into what Done Wright can accomplish in the studio. Autumn is always in need of a soundtrack, and this artist is giving us a great one here.