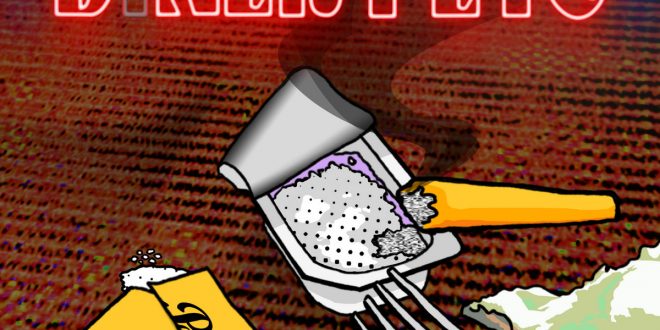 It’s hard to hear the opening riff in the song “Black Smoke” without thinking of the casual pop/rock of the Beatles, but as Pant will prove over the next few minutes – and across the whole of their new album Diner Pets – they’re a lot heavier than any throwback pop act out right now. Their fretwork occasionally verges on psychedelia at a few different points in this tracklist, including the first guitar solo we run into in “Black Smoke,” the superior strut of “Manic State Conniption” and “Kumquat Lady,” as well as later on in the garage rock-style “Nothing Set in Stone.”

While there’s been quite a bit of interest in some of the indie rock coming out of this band’s scene as of late, I’ve got to say this is one of the more surprising listens I’ve come across in the last few months.

The relative calm of “Miss Molly” doesn’t conflict with the wallop of “Manic State Conniption” nor the sting of “Lazy,” and overall I think most of the material here meshes together incredibly well. You can tell there’s a bit of hesitance in a couple of spots between “How Many Days” and “A Suite No Less Divine,” but it almost makes the lyricism and the adjacent grooving just a little more human than it would have been otherwise. Although it’s quite obvious that Pant is dealing heavy hands at every opportunity they can put together in Diner Pets, there’s something to be said about the diversity of their actual profile, which is perhaps reason enough for some of the more serious indie rock aficionados out there to be taking them seriously at the moment.

“Interlude,” “Blind Squid,” “You’ll Find,” and “Kumquat Lady” summarize the multilayered nature of Pant’s recording approach in this performance, but I get the impression they’re still experimenting to find that perfect balance between crude psychedelic noise and a more refined, albeit non-progressive, compositional style befitting of their collective skill. There’s no getting around the abilities they’re showing off in terms of their rhythmic abuse in “Nothing Set in Stone” and “Everyday,” and if given just a little more room to breathe in a few of these arrangements, I think they would have jam fodder for a live show without question. There are some rough edges here for sure, but they’re endearing in the same way some of the best garage rock to come out of the late-60s was.

Despite some lyrical simplicities that some critics might describe as being a bit stock in comparison to the strength of the music on its own, Pant’s Diner Pets is a fascinating juxtaposition of retro melodies and a modern sense of experimentation that tethers even the stranger components together in every song on the record. I’ll be curious to see what their sophomore affair sounds like, but I love the looks of the gristly parts in Diner Pets – like the dirge of “Interlude,” or the aforementioned solo that opens the sonic floodgates for “Black Smoke.” They speak to the carnal half of their sound that I enjoyed the most when listening to this twelve-part fusion of haze and harmony, and I hope to encounter them again the next time I review this band’s content.