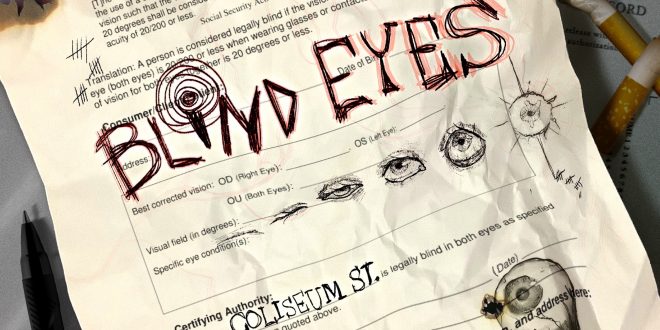 When you think of punk rock hotbeds, you might think of cities like New York, NY or San Francisco, CA. But you probably wouldn’t think of Oahu, HI. Well one band is looking to change that, their name is Coliseum St. and they’re about to put Hawaii’s third largest island on the punk rock map.

Started by sisters Ella Malarkey and Valentina Moghaddam during their time at Kailuna Music School in 2019, their lineup would soon fill in with additional members Connor Purington, Sam Seibert, and their bassist known as Basil.

Back in May they put out their debut single, “Blind Eyes,” the song is described by Malarkey who says: “: I wrote blind eyes during a time that i was really, really struggling with OCD and anxiety. I desperately needed to vent and channel all the intense feelings and frantic energy i was feeling into something, to externalize it. i really wanted the writing style to reflect the way i was thinking, rather than just the thoughts i was having, and so the “again and again” bit was the first thing i wrote. songwriting for me is primarily about storytelling, and part of telling this story was also making the sound and movement of the song mimic the build, peak, and crash of a panic attack or a meltdown.

She continues:  The response to blind eyes has been really incredible and it means so much to me personally to hear how people have been able to connect with it. For me, finding songs that articulate something that I couldn’t, or songs that make me feel understood is hugely impactful, and I want to be able to give that to others.”

The fast paced track, raw with emotional energy speeds through evoking the frantic energy described by Malarkey, clocking in at 3:21, just a little longer than the classic 3 minute punk song.

From her point of view, Moghaddam shares: “It’s been amazing to see the response to Blind Eyes– from all the people who came out to our release party and all the feedback we’ve gotten online since. Specifically knowing that what we were trying to convey in the song has been felt by a lot of people, and has made them feel something, is really incredible. When we were writing the music to Blind Eyes after Ella brought us the lyrics, our objective was to instill a vibe with the song that projected a certain feeling of nervousness. Watching the evolution from the first riff to what the song is now, and knowing that we did it justice is really gratifying. It’s always kind of nervewracking to share your art, to put it onto the internet, to go out and perform it. Coliseum St. has been this amazing platform to do so, and I attribute a lot of that to our shared passion for music and the lovely group dynamic we’ve built. I’m excited for what the future holds for us, and to share more of our work with the world.”