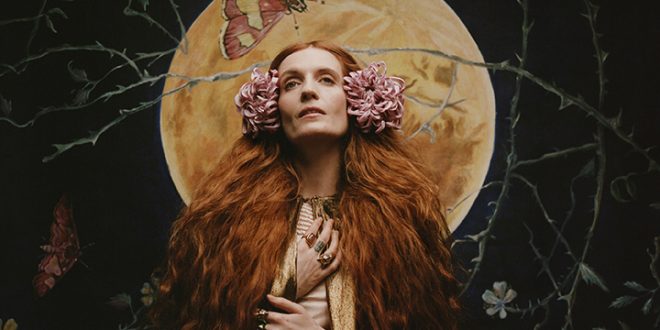 There is a convergent intersection between character and authenticity in the spirit of conceptualized albums. Fabricating a folkloric aesthetic whilst creating music that is so true to its core is something that Florence Welch has always excelled at. On her fifth studio album, Dance Fever, British alt rock band Florence + the Machine strive for nothing short of musical transportation and pushing the barriers of expectation.

On their long-awaited return, following 2018’s High as Hope, the band conjured up a concoction of what was missed most in the midst of lockdown- being in the whirl of movement and togetherness- and the hope of reunions to come. In a time when humanity could not be together, Florence penned poems-turned-lyrics that envisioned our revelry and crafted a future where we danced together once again. As to be expected from the decorated songwriter, Florence creates an environment of her own, where she bewitches audiences into a state of total catharsis and exploration of self. It’s a timeless and spirited endeavor that Welch enacts so effortlessly. Transcending the realm of one particular genre or time period, her songs blend into a 14-track ode to our ancestry, ourselves, and human nature.

The Renaissance-inspired album is laced with grandiose ideologies presented in a modern way. Co-producers Jack Antonoff and Glass Animals’ Dave Bayley aided Welch in honing her pop instincts without restraining her eclectic impulses. Work for the album began with Antonoff one week before COVID-19 hit the world, halting her process and sending her back home to London. Influenced by her desire to break free after the pandemic and itching against the urge to not remain complacent, especially after touring routinely for a decade, each track represents a different emotional excursion.

As the album’s opening track and the first single released for the project, “King”, serves to awaken and entrance listeners in a trotting anthem of self-prowess and gender exploration. It is an exhilarating kick off to the album, repeating “I am no mother, I am no bride. I am King” with such self-assurance that there is no shadow of a doubt that Florence penned this as a means of empowerment. While the general formula is the same as it’s ever been, the band amplifies their trademark baroque pop sound in a larger-than-life rush of gusto and throbbing percussion.

“Free” is a charged synth-rock anthem chronicling the vicissitudes of life, accepting the reality of emotions and epiphanies, (“I’m always running from something / I push it back but it keeps on coming”) and continuing to dance despite it all. It projects a jubilance and reassurance, despite mentions of darker themes (“let’s discuss this at the hospital”) while Florence figures it out through her anthemic vocals, signature charisma and, of course, sweeping dance moves. “For a moment, when I’m dancing/ I’m Free” will certainly be stuck in your head as you twirl around carelessly. “Choreomania” follows at the most opportune time, enabling a dervish rush of catharsis through dance that acts as the catalyst for a spiritual awakening. Choreomania is a Renaissance-age phenomenon Florence has always been intrigued by and has studied over the years; the Middle Ages concept of being so lost in euphoria that one dances themselves to death. The song evokes this feeling, beginning in spoken word atop a bright, ritualistic beat before evolving into a hollering uproar against stillness.

Florence eases back down to Earth in “Back In Town”, a vulnerable ballad reflecting on her return to New York post-quarantine. On “Girls Against God” she earnestly reflects on love in a song Welch calls “old testament style fury” at being unable to perform and express herself in the only way she knows. “Dream Girl Evil” is a rumbling call to her own power, which she is very much in control of, and another track you’ll find yourself singing.

Vocals boom in a chanting rhythm on the Celtic-folk tinged “Heaven Is Here”. The 1:51 length track ends with a whisper of spoken word, “And every song I wrote / Became an escape rope / Tied around my neck / To pull me up to heaven.” The proceeding track, “Daffodil,” opens with a gasp of air, as if she is spent from her prior hedonistic voyage. Florence sings about transcending generational trauma with the “helpless optimism of spring.” Her reflections lead her to finding beauty within something dark, threaded with her mystical charm (“Made myself mythical/ tried to be real/ saw the future in the face of/ a daffodil”.)

A diluted battle cry is prolonged for the introduction of “My Love,” the most outwardly pop track on the album. With help from Dave Bayley, Florence achieves a glimmering dark-disco number, teetering on the brink of explosion. With Dave’s affliction for synth-based tracks, and Florence’s fascination with all things gothic, she took inspiration from the tragic heroines of pre-Raphaelite art, the gothic fiction of Carmen Maria Machado and Julia Armfield, and the visceral wave of folk horror film. Punctuated by gasps that fill her lungs with life, the song possesses a power of its own, in which even Florence herself is entranced.

The majority of the album revels in its extravagance and sweeping ambitions, even in its softer moments on tracks like “Cassandra” and its short pieces “Prayer Factory” and “Restraint” that serve more as poetic interludes, than they do songs. “Have I learned restraint?/ Am I quiet enough for you yet?” Florence croaks in a strained tone on the aforementioned “Restraint,” which is by all means the most erasable track on the album and is more creepy than it is enjoyable.

In its entirety seeps Florence’s desire which ultimately guides a rumination on memory, loss, rage, desire, and confliction. Even in its chaotic moments, there is a deep sense of control, as she reclaims her power within a world that stripped away any sense of control and normalcy. Through desperation and plenty of time to ponder it all, a beautiful work of art that Florence herself describes as  “a fairytale in 14 songs” emerged. Dance Fever is an album that finds Florence at the peak of her powers, of self actualization, and playing with her persona and the ideas of identity and humanity. Each song resembles a spark of hope she attempts to ignite, and by the end of the album, you realize you have been fully engulfed in her flame. Dance Fever is available now.