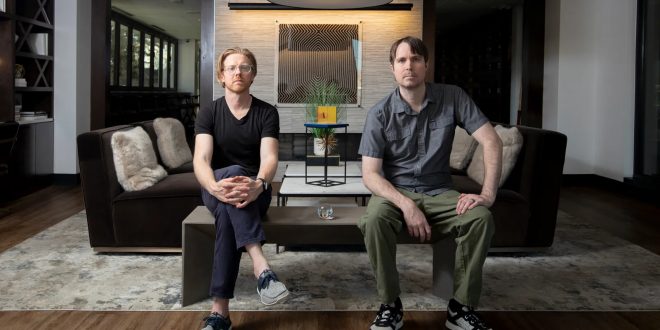 Dan Hartman and Charles Ingram, the men that make up the alternative and psychedelic rock duo, The Impliers, started playing music together in high school in Greenville, North Carolina under the name Phantom Zell. Here, they were able to successfully break into the underground indie scene populated by members of now-iconic bands such as Future Islands, Valiant Thorr, and Municipal Waste. At 15, the guys vowed to not be like the adults they saw whose love of music got buried over by life.

They have been working on their debut album, cocoon, releasing 3 singles so far. Their latest single release, “Lightning,” explores sounds of psychedelic rock, grunge, pop-rock, and synthpop. It starts with a space-like sound with their deep processed vocals and synth styling. What’s so special and unique about this song is the unexpected nature of it. You are never quite grounded in a set beat or melody. It’s a surprise with each passing verse and chorus.

Lyrically speaking, “Lighting” is open to so many interpretations, which is yet another piece to what makes their music great. You hear something new each time, like your mind is being opened to another story with each listen. However, “Lighting” actually has a more personal meaning for The Impliers. Lyrically and musically it reflects an experience with bipolar disorder that they both share.
“Charles and I have been able to learn a lot about what it means to be bipolar as we both have been diagnosed with this,” shares Dan. “I had always thought bipolar was someone who rapidly changed their mind or moods and was hot and cold, but it’s more of an exaggerated version of what everyone tends to go through – which is a longer arc of being down and then a coming out. Think winter to spring with more of a spike in either direction or higher frequency. It was so interesting to learn that bursts of creative energy and motivation that most of us feel can actually be a symptom of bipolar, the mania specifically – that had never occured to me that the higher highs were one of the poles. I think this song shows some of that bipolar thinking in seeing different perspectives, with bursts of energy and some subdued elements while showing forward progress in diving within – it really compliments the broader story we explore on our record ‘cocoon’ (coming out on August 19) as it rounds out the first part of the record before there’s a change in atmosphere.”

Stephen Vicino is the founder of MusicExistence.com. He created this site to give talented musicians a voice and a way to be discovered.
@@svicino
Previous Maejis Mind – “At Water”
Next Victoria Alex impresses again through her commanding voice in the song ‘I HATE YOUR FRIENDS’