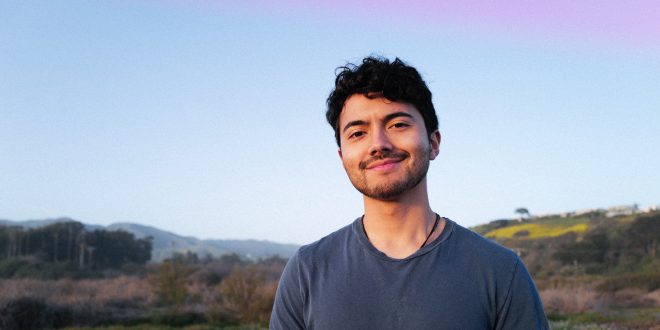 Maejis Mind is a solo music project by James Beasley, a musician originally from Philadelphia and currently based in Los Angeles. Since releasing his first single in September 2021, Maejis Mind’s music has explored psychedelic rock/pop, dream pop, acoustic and R&B.

On the verge of releasing his second EP, ‘At Water,’ Maejis Mind created a body of work that makes the listener feel as if they are underwater, or standing close to water. Immersing the listener in this unique and transcendent experience, Maejis Mind’s lyrics and production focus on the timelessness of memories, and the act of “switching” between memories as one switches between different songs. Seamlessly transitioning from track to track, the aim of this EP is to ebb and flow as one big piece of beautifully presented music, and this is achieved in spades.

Taking influence from inspirational artists such as Pink Floyd, Maejis implements his own style with modern and cross-genre production techniques that stand out from the crowd. ‘At Water’ is full of dreamy textures and psychedelic intonations, all while presenting emotional and stirring lyrics.

The first song “Watch The Rain” is a psychedelic pop/R&B song that addresses the desire to hide away in memories instead of facing harsh realities. “There Was A Time” is a psychedelic rock song with a driving rhythm section and big, distorted guitars and 808s. The final song “Face On The Water/Empty Room” is a two-part song, first with an acoustic singer-songwriter style song that leads into an outro instrumental. This three part and all encompassing EP fully showcases the ability and tonality of Maejis Mind, and that is as an artist who is walking in his own lane entirely.

This is a solo project, but did you invite any other musicians to play on it, or did you tackle the whole thing yourself? What was your recording process like?

For this music project I play all the parts myself. However, with “Watch The Rain,” my close friend and roommate did the snaps. He also has a “spoken word” that’s kind of like the easter egg of the song. The recording process is different each time, but it typically starts with getting some chords on the guitar and/or synth, then adding a backbeat from the kit. Then I’ll do vocals, solos, and all the other production stuff that leads to the final product.

This EP’s vibe is such a marriage of analog and digital sounds–both instrumentally and stylistically. What do you feel is the interplay between these sounds in your work?

I think the combination of acoustic sounds and synthetic sounds creates an otherworldly vibe, for lack of a better way to put it. For example, in “Face On The Water/Empty Room,” I felt that the acoustic guitar was well complemented by the synth. The synth made the song feel surreal, but the acoustic guitar grounded the song since it’s a familiar sound to all listeners. Mainly I just wanted these songs to be psychedelic, and synthetic sounds have a tendency to be trippy.

The three tracks blend together seamlessly, which is sort of a throwback to many early psychedelic albums. Can you speak about why you chose to present these songs as a unified whole as opposed to three distinct singles?

These songs are about memories and nostalgia. When we remember memories naturally, they flow together without a clear end or start to the individual memory. At least, that’s the way it works in my mind. So artistically, it seemed natural to have the songs flow from one to the next without a stop. To be more practical, the first two songs are in E-flat, so they flowed together very well even without the transition. Overall, I just thought it sounded cool.

You’ve mentioned being inspired by Pink Floyd and that influence definitely comes through. Are there any other direct influences in your songwriting, recording, or approach?

Radiohead and Tame Impala are huge influences for me. I love both of their music, and find that Tame Impala is incredibly encouraging to independent solo artists. In terms of production, I draw a lot of inspiration from hip-hop and R&B producers. I think some of the best producers ever work in those genres, and there’s constant innovation there.

If you could get one person, living or dead, to listen to this EP, who would you want that to be?

Probably Brittany Howard, so she could critique my vocals and teach me how to write a song.

Stephen Vicino is the founder of MusicExistence.com. He created this site to give talented musicians a voice and a way to be discovered.
@@svicino
Previous Tik Tok Influencer v.s. Soundcloud Rapper
Next The Impliers Unleash Their Electric Single “Lightning”