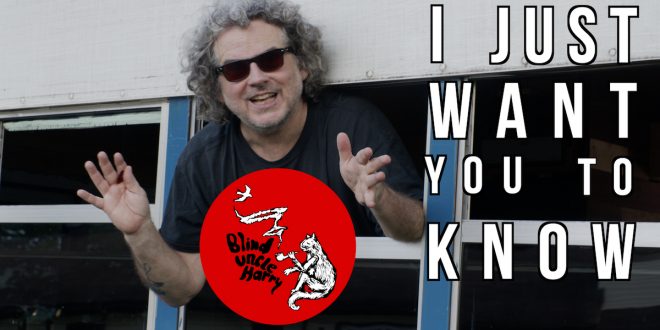 Blind Uncle Harry Presents ‘I Just Want You To Know’

Blind Uncle Harry’s single, “I Just Want You To Know,” is an example of describing a person’s character by who they aren’t, rather than who they are. Lyrically, it’s song about how Harry is not one of the bad people in America. You know, the people that do all the wrong things in America. He had nothing to do with any of this wrongdoing. As the song clearly states; he just wanted you to know this.

These days, virtue signaling has become an essential for many. Especially on social media platforms. Whenever there’s an injustice, committed anywhere in the world, these virtue signalers are quick to post how they are opposed to the latest injustices. Please don’t ever associate these people with those evil folks. These are the good guys, not the bad guys.

Blind Uncle Harry’s single begins with a thumping bass line, which is soon joined by the singer/songwriter’s shaky singing voice and a strummed acoustic guitar. The song’s first verse sounds to be aimed squarely at capitalists, where “profit is god.” Blind Uncle Harry is not one of these money grabbers. When Blind Uncle Harry gets to the song’s chorus, he’s joined by an empathetic second voice, a female voice, as well as folksy fiddle part. Blind Uncle Harry has “nothing to do with it,” he reminds us.

Next, Blind Uncle Harry rants against religious cults, but praises marijuana. He continues by calling the U.S. a military state, filled with people dedicated to mindless consumption. “You pay a high price to be born an American,” he tells us, although it’s not entirely clear what price he’s talking about. Is it because Americans are born mindless consumers? Or is it because we’re born into a military state? Or both? Blind Uncle Harry makes the U.S. sound worse than a third world country. One imagines those born into poverty, say, in India must have it worse than Americans. That seems to be a much steeper price to pay, right? Blind Uncle Harry isn’t comparing America to other countries, though. His purpose seems to be finding everything wrong with the USA and putting this into a song. And granted, there is plenty of wrong with America. But there’s also plenty of right, too, but these characteristics, and the people that exemplify them, don’t find room in Blind Uncle Harry’s song.

This is not to take anything away from Blind Uncle Harry’s statement-in-song. He’s telling the truth. He’s just not telling the whole truth, it seems, which makes his lyrics a little problematic. It’s also a little disingenuous for Blind Uncle Harry to claim he’s not to blame at all. Sure, he may set a high moral standard for himself. Yet, we’re all complicit, to some degree, with what’s wrong with the world. Even if it’s a sin of omission, where we know the good thing to do, but we don’t do it. That’s a sin, too.

About midway through the song, Blind Uncle Harry sings about hearing the news of John Lennon’s death. It’s not clear what this incident has to do with the artist’s overall theory for the song. Is it an instance of gun violence, where guns need to be banned? Is it another example of America’s violent tendencies? John Lennon died at the hands of a crazy guy, so, is this an example of America’s lack of care foe its mentally ill? One is left wishing for a little more clarity.

Stephen Vicino is the founder of MusicExistence.com. He created this site to give talented musicians a voice and a way to be discovered.
@@svicino
Previous The Bobby Lees share official music video for “Hollywood Junkyard” + sign with Mike Patton and Greg Werckman’s label
Next Alias Wayne Releases ‘Chaperon’