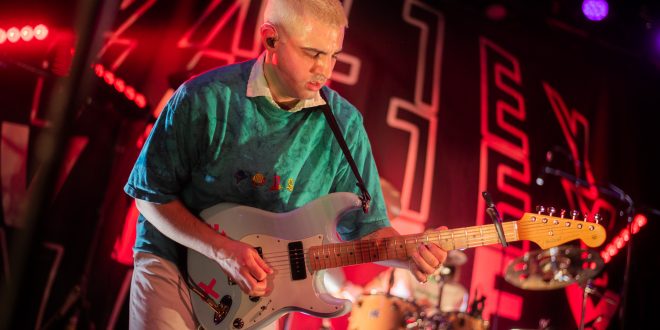 On the opening night of their i’ll be with you tour, Canadian four-piece Valley kicked off their first US headlining tour with a sold out show at the Sinclair Music Hall in Cambridge, MA. The first of a string of 18 dates, Valley performed to a sold out audience of 600 enthusiastic twenty-somethings, eager to scream along to every word. The 19-track setlist was jam packed with their viral hits along with newer songs off their latest EP “Last Birthday (The After Party)”. The alternative pop outfit hails from Toronto, Canada, but has left their mark on a US audience through a series of tours opening for acts like Lennon Stella, The Band Camino and Coin. The band’s popularity on social media and climbing numbers on streaming platforms only adds to the hype for Valley, which sets them up for a highly anticipated North American run of shows.

Opening the show up with their title track “Last Birthday” served as an instant stimulant to ignite the crowd. The band’s contagious energy only fueled the excitement of the fans, so much so that at times the audience’s own voices overpowered the vocals of lead singer, Rob Laska. After a brief joke about being near Berklee (College of Music) the band continued the show with intermittent stories, jokes, and other nuances to further audience interaction. Laska also got brownie points for adorning a Boston Red Sox tee shirt, because if there is one way to win over a New England audience, it’s to support our teams. Besides the band’s highly energetic performance, one of the most engaging and charming aspects of the show was their humbled statements. Admitting that the first time they played Boston was to a room of 30 people at the Middle East Night Club, Laska took in the packed crowd before him with the eyes of a kid in a candy store. As each lyric was sung back in perfect unison, the show was driven by the competing energies of the crowd and the band.

The night’s standout moments include “Oh shit… are we in love?,” “SOCIETY,” “Park Bench,” and the two encore tracks, “There’s Still A Light In The House” and “Like 1999”. During the second track “nevermind,” the audience was prompted to crouch down then jump in unison as the chorus of the song exploded atop a drum solo turned breakdown. The anatomy of Valley songs provide danceable choruses broken up with electric riffs, and slow bridges that provide tender moments. Each part of the show was punctuated with these bursts of intense release and unification that created a collective musical experience.

Valley’s chemistry onstage illuminated not only their musical camaraderie, but also their close friendship, exemplified in moments where they patted one another on the head, grinned at each other from across the stage, or in one instance, lent a hand to help a member up off the ground. If this show was any indication, Valley clearly have spent their years growing tighter as a unit and are ready to take on America as a refreshing, sincere and engaging voice for Gen Z.