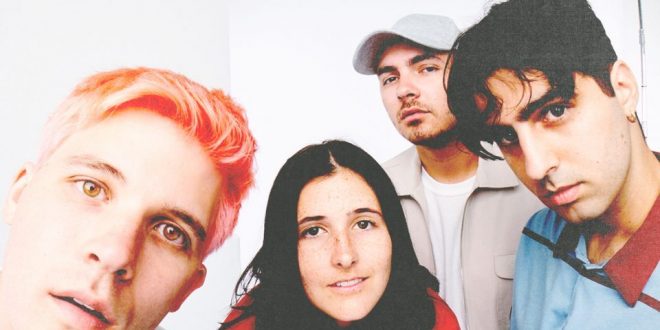 Toronto-based alternative pop band Valley have emerged as an act to watch over the past few years. Heightened by their popularity on social media sites like TikTok and supporting slots on tours with Coin and The Band Camino, Valley has asserted themselves as an indie pop force to be reckoned with.

The Juno-nominated four piece have garnered the attention of young audiences across the globe, with their relatable, coming of age lyrics atop catchy choruses and bubbly pop production. Their latest release, The After Party, arrives January 12th and follows 2021’s, Last Birthday. Intended to be consumed as its counterpart, the three new tracks on The After Party connect the two releases together with the focus track “Last Birthday,” kicking off the new EP.

“Last Birthday” is perhaps one of Valley’s catchiest songs yet. It contains duality with an upbeat tempo and a relaxing flow, while incorporating both acoustic and electric elements. Thematically, the song promises an unknown character they’ll always be there when life gets tough. The catchy refrain of “I’ll be with you” echoes the chorus and acts as an earworm you’ll find yourself singing all day.

The second track, “7 Stories” is an acoustic ballad, chronicling the process of a breakup when you’re just not ready to let go. With a chorus of “I will still hold on”, the track shares a similar feeling of nostalgia and longing.  Following suit to these ruminations of melancholy, the EP closes with “Paper Cup” which is equally as introspective and ties the release together with no loose ends. Lead vocalist Rob Laska earnestly sings “This is me just feeling sorry for myself” as he deliberates a list of his own flaws, name checks friends, and worries about the future. At one point, his self-awareness cleverly breaks the fourth wall by stating, “I can’t even write a pop song, I can only story tell”. The track transitions from a piano ballad to a faster paced electronic-backed track that ends with an explosion of sound reminiscent of older alternative acts like The Neighbourhood or Fun. It’s full of honesty and confessions that are both introspective and widely relatable, which emphasizes Valley’s position as being one of the most refreshing and engaging new bands.

Unafraid to play with the limitless boundaries of pop music, Valley have now incorporated a crisper and more fine-tuned sound while still churning out the danceable tracks fans fell in love with. Lyrically, they don’t speak in metaphors but rather songs that read like diary entries. The After Party  finds Valley realizing their own emotional and musical growth, and provides a comforting reassurance we all could use now.