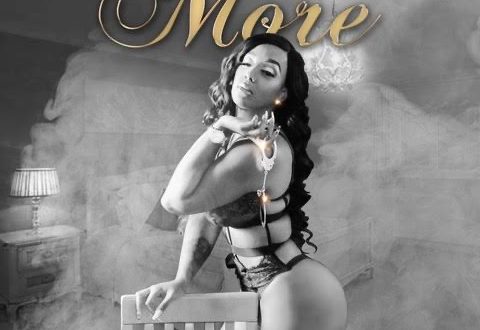 In her new single “More,” Alli Starr’s sole focus is emphasizing big rhythm, and the erotic music video for the track reinforces this in no uncertain terms. Using sexuality as a symbolic extension of the groove, Starr dexterously creates an inescapable web of seduction with the beat in “More” whilst delivering a tantalizing lead vocal sure to leave anyone with a taste in red hot R&B more than a little excited. This is a credible performance from an artist not getting nearly as much attention as she should be right now, but considering the pedigree of this single, that seems fated to change.

The harmonies in this track bring to mind Azure, specifically with regards to her collaborations with Snoop Dogg back in the 2000s, but I wouldn’t necessarily say that “More” sounds like it’s been sourced from a G-funk concept. Contrarily, there’s a removed sense of surrealism backing the bassline in this piece that firmly plants the pop sensibilities of the song in the future, particularly as melodic trap and R&B continue to meld in provocative new ways. Starr wants us captivated, and she’s using much more than her voice and the verses she sings to get what she wants.

This music video isn’t all lust; there’s an understated sophistication to the shots that is underscored dramatically by the barren surroundings of the desert. Rather than attempting to overstimulate us with a lot of cerebral visuals that could have got in the way of our really appreciating the depth of her performance, Alli Starr is taking them out of the equation altogether. There’s nothing I appreciate more than a musician who values efficiency, and in “More,” we’re getting a good look at just how well she can work a black and white aesthetical blueprint with little assistance from behind the glass.

I’m very eager to hear more from Alli Starr in the future, and while I wasn’t following her very closely before getting turned onto this track, I think the promise she shows off here is worthy of a second look. It would be interesting to hear how she could manage a beat not quite as clubby as this one is, but for what she was trying to put together in “More,” I don’t know that she could have presented us with more surgically precise performance and showcase of who she is both inside and outside of the recording studio she dominates.