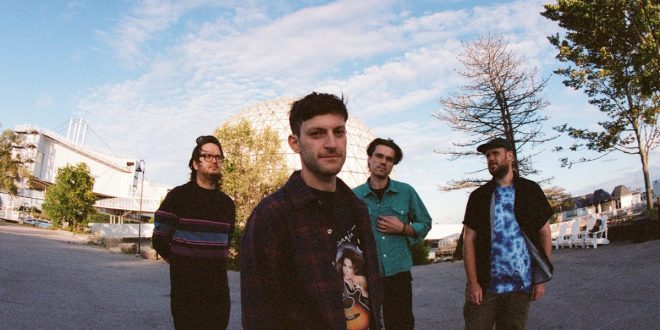 Today Toronto punk heroes PUP announce their  ambitious and aptly titled fourth album, THE UNRAVELING OF PUPTHEBAND, out April 1. The record was recorded and mixed over the course of five weeks in the summer of 2021, in GRAMMY Award-winning producer Peter Katis’ bat-filled mansion in Connecticut. With more time in the studio, they were able to craft their songs sonically in a way they were unable to in the past, and allowed themselves to incorporate new instruments like piano, synths, horns, and more for the first time. Though made in madness-inducing isolation, PUP were remotely joined on the album by Sarah from Illuminati Hotties, Kathryn from NOBRO, Mel from Casper Skulls, and Erik from Remo Drive.

PUP released “Waiting,” which will appear on THE UNRAVELING OF PUPTHEBAND, upon announcing their forthcoming tour a few weeks ago. (That tour, by the way, is on-sale HERE and dates can be found below. Did you know they’re playing Coachella & Shaky Knees, too?) Today the band share a new single and music video for “Robot Writes A Love Song.” Written in 15 minutes and with vocals recorded in the backseat of Stefan’s car, “Robot Writes A Love Song” dissolves into a wash of nervous vocals before becoming what is surely the most emotional song ever written from the perspective of a computer being overwhelmed unto death by actual human emotions.