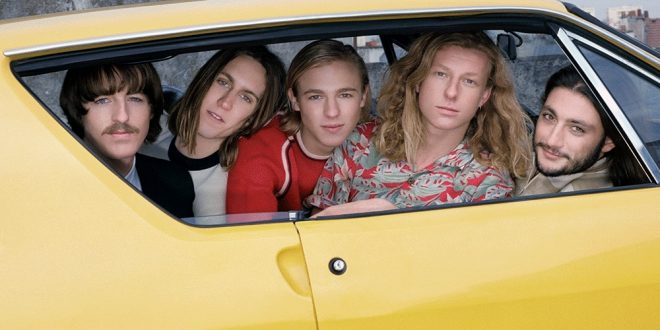 The chiming keys and supple strings of the intro to Parcels’ new single “Comingback” are tone-setters, but when the bittersweet vocal croons us the question of “Is anyone out here, out on their own?” a sense of emotionality washes over the mix and immediately changes the tone of the song from one of upbeat simplicity to complicated passion put to an affectionate groove. There are layers to unpack here, starting with the instrumentation in “Comingback,” and when looking at the catharsis-soaked music video for the track recently, I found it evident that each of them has something to offer us no mainstream pop single can match this season.

Clandestine verses greet us around each twisting bend in the beat, and I think they sound a little more profound in this performance because of the slight rush pushing them out beside the rollicking guitar strings. There are a couple of moments in which it feels like these players are in a race to reach the fever pitch in the song, with their mad dash resulting in some of the most brilliant friction a rock outfit can muster without the assistance of hard-charging electric fretwork. It’s downright incendiary, and exciting in a manner uncommon in this style of music right now.

This percussion has a supreme color that is hard to ignore given the exquisite mastering of the track, and overall, I like that Parcels didn’t see any need to give us an explicitly raw finish in the production quality of “Comingback.” A lot of bands are pushing the envelope with pseudo-DIY mixing these days to sound more low-fidelity in tone than they are, but there’s no such fronting in this group’s dynamic. They’re pure indie because of their willingness to be themselves and not because of an ability to recreate the murky melodies of a like-minded predecessor.

Parcels’ eponymous 2018 debut was a real fire-starter in Australia, and this latest offering suggests that they’ve only gotten better in the three years that have gone by since its release. Live Vol. 1 made me want to catch their stage show when it next lands in North America, but based on the ambitiousness of “Comingback,” I would have to say that their studio experimentation might even eclipse where they’re at as a performance unit at the moment. There’s a classic rock element here that you can’t get away from no matter what part of the track you’re listening to, but in comparison to when fellow Australians Wolfmother blew up nearly twenty years ago, this feels like more of an alternative – and potentially more influential over the indie rock of tomorrow if it continues to develop the right way.