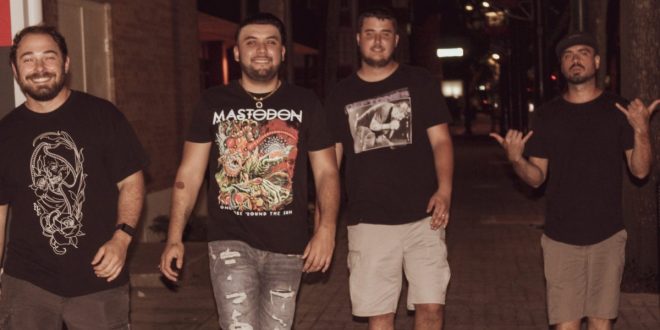 Orlando, Florida metal outfit Fabricate has independently released their debut album Welcome Home. “The album is about you never know what happens behind close doors,” explains the band. “We want to have the same energy of the albums we love and grew up on.”  Fabricate come out swinging on their debut, an album that is a journey of anger, frustration, and pure rawness. “We want people to really dive into our songs and even feel uncomfortable at times.”

The eight-song album features the singles “Cicada” and “Child Of Darkness”. “Cicada” is all about the process of metamorphosis. “It’s about how when we transform into the person we are now, sometimes, we do not like the outcome.” says that band. “People say ‘one day you will go from a caterpillar to a beautiful butterfly, but sometimes that’s not the case. Sometimes we sprout into something we don’t like.”  The follow-up single, “Child of Darkness” focuses on mental health. ” ‘Child of Darkness’ is about the misuse within state-run mental health institutions from 1940 to the 1980s,” explains the band,  “Either in school, family, or society. A song for the outcast.” “Child Of Darkness” stands out from the rest of Welcome Home as the only track without scream vocals. “The band decided to try a song without screams. Let’s see if we can pull it off. It is different than anything else we did.” says the band. “Surprisingly we decided to make it a single just because of how different it is. We felt it blended elements of some of our favorite bands like Deftones and Loathe.”

Fabricate was meticulous about their sound entering the studio. “Our producer, Manny Rodriguez from Luminara Studios, really pushed us. We really focused on the punch of the song. being fans of bands like Korn, Slipknot, and Lamb of God. We have always loved the rawness of those bands, especially their early work.” the band says.  “Watching our producer lose his mind over the intro drop was a moment we will never forget. Made us feel like we really had something special.”