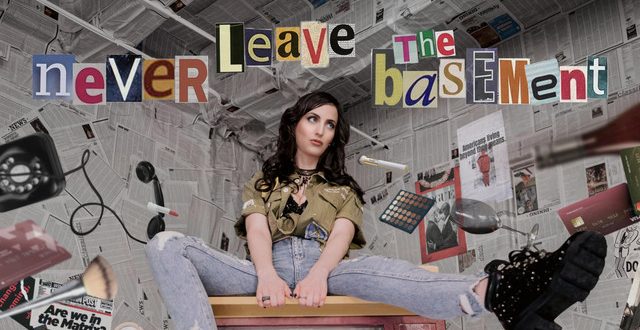 Down in the basement but still up in her head, Nadia Vaeh takes us on a visual daydream in the music video for her single “Never Leave the Basement” this summer, and as painfully relatable as the narrative of this song is, it’s ironically one of the brighter pandemic pop tracks I’ve listened to in the past two years. There’s something undeniably uplifting about the harmonies this songstress assembles with little more than her voice and a poignant guitar part, and although bouncy and playfully arranged, this is a song that spotlights its performer’s focus as much as it does her fun personality.

The guitar here is honestly a little louder than it needs to be, and I think it intentionally dominates our focus beside the lyrics Vaeh unleashes with ease. There’s an almost familial affection between its strings and our singer’s voice, and when they’re harmonizing it’s almost as if the two elements are working as one force in the master mix. She could be singing just about anything and still sound like a master melody-maker with this guitar in her hands, and that’s hard to argue with after listening to this terrific performance in “Never Leave the Basement.”

A new generation of exceptional women are the undisputed face of pop/rock in 2021, and among the indie players I’ve been reviewing in the past couple of months, Nadia Vaeh stands as one of the best in the American underground. She doesn’t have to force the emotion here; it’s all-natural charisma as realized through unsophisticated songcraft, which is really the best kind to enjoy in this genre. Vaeh’s inviting lyricism and humble harmonies have the potential to spruce up a summer pop playlist in “Never Leave the Basement,” and that’s not something I’ve noted about any other tracks covering this subject in recent memory.