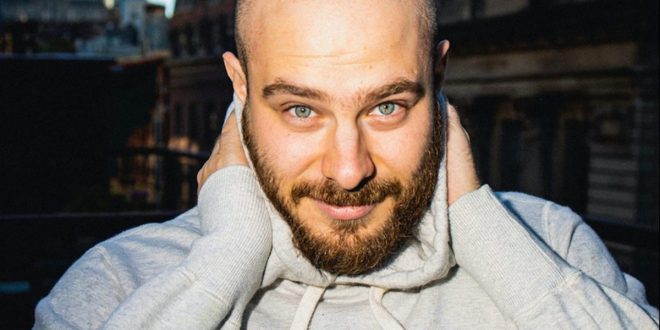 “Row Me Away” will strike a nerve for many listeners. Leo Sawikin’s title song from his first solo album is one of the best songs about yearning itself I’ve heard in a long time. Sawikin dramatizes his desires with a deft hand in every aspect of songcraft; the spotless arrangement, the individual performances cohering into a greater whole, the probing lyrical content. “Row Me Away” doesn’t strain disbelief with histrionic melodramatics. Each second of this track surges with palpable human emotion often barely restrained and, during other moments, given full vent.

It takes some time to build a head of steam. “Row Me Away” begins life as a pensive introspective number but, around the one-minute mark, the drumming snaps with conviction and the musical canvas broadens. “Row Me Away” has a current gleam, Marc Swersky’s production skills shoulder significant responsibility for the song’s sound, but its underlying structure reveals a impressive command of fundamentals.

He references several singer/songwriter influences that shaped the writing of his debut album and evidence for his claims is rife throughout this track. You can hear the strong imagistic slant of Joni Mitchell’s lyrics present in his own and numerous other flourishes and affectations establish further connections along the way. Sawikin, however, avoids even a single moment when his performance comes across as rank imitation.

Sawikin’s vocal phrasing is a highlight. The light post-production effects Swersky adds to his singing dilute the impact of his phrasing, but it never mars an otherwise first-class example of bringing words to life. He lives this song for listeners, often teetering on the edge of his seat, but his artistic controetains enough of a hold on the material that it never careens out of control.

His certainty inspires. Astute observers would excuse Leo Sawikin if his solo debut betrayed nerves, but “Row Me Away” never betrays a hint of tentativeness. He sounds like he entered the studio to do this track sure of exactly what he wanted by the session’s conclusion and, by nearly any measure, he’s succeeded. The song’s themes of longing for a better day to come is an emotion any listener can latch onto.

Coming in on the ground floor of a promising solo career is always exciting. I will be following Leo Sawikin from this point forward and I believe the coming years will bring his fans an abundance of great music designed to stand the test of time. It is clear he has no desire to write and record the frilly and ultimately disposable sort of pop music that’s standard fare these days. This is music engaged with what it means to be human rather than the fashion of a particular moment and there’s no reason to believe Sawikin won’t continue following that path. “Row Me Away” is one of 2021’s most powerful singles so far and will generate a great deal of enthusiasm for his upcoming album release. It sets Leo Sawikin on his way and there’s little chance he’ll be looking back much from here.