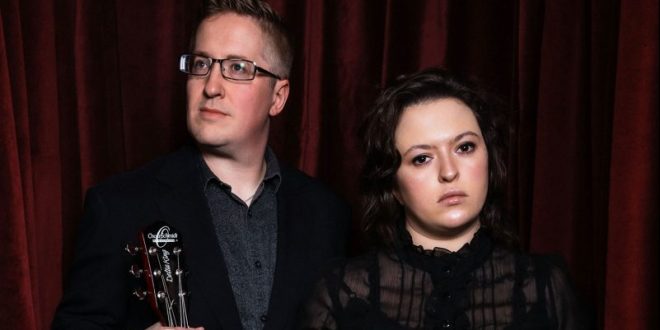 Tomorrow, Phantom Ocean will put out “Notice Me Senpai,” the carrier single off their forthcoming EP, Secondhand Ghosts, slated for this fall. Following the cancellation of their debut performance in the wake of Covid-19 last year, the Boston, Massachusetts husband-and-wife duo of Drew and Sarah Smith worked closely with one another in a fast collaborative pace, releasing two DIY singles by summer. Drew, whose musical background draws from punk and blues, unifies Sarah’s equally compelling channelings of jazz and riot grrrl, all of which emits theatrical undertones.

On the duo’s new single, their thematic angle centers on a common thread in school-based anime – that of freshman female students crushing on their male sophomoric peers. Stylistically, Sarah bolsters Drew’s showers of crunchy, melodic chord sequences with straight-ahead, yet gracefully nuanced percussive tendencies throughout. The two then assume a comedic lyrical approach, Sarah cheekily highlighting the initially good-natured, but gradually obsessive and downright sinister motives of the female student, while Drew responds in a swift, lighthearted exclamation of the song’s title. As the song progresses, the tables unexpectedly turn, with the male now assuming a dominating role to an even scarier and especially brutal extent. This single provides a decent showcase of talent and dynamics of both members – as husband and wife, and individually – and I look forward to how it will be further expressed on their new EP.

I come from a family who is passionate about all things music. I learned to sing at an early age, and by 13, had my very own Fender Strat guitar. I tried my hardest at learning all that I could. Because I was born with cerebral palsy, I had to teach myself an adaptive playing style. I learned to write and record my own music, despite these difficulties. In college, I started making great use of my writing abilities by reviewing music, as well as copy editing. I guess it's best to stick with what you know, while welcoming a fair challenge at the same time.
Previous Emily Lazar (September Mourning) Teams up with Jesse Meester and Griffin Carlson to Create “Thinking of You”
Next The Beaches Announce New EP “Future Lovers”