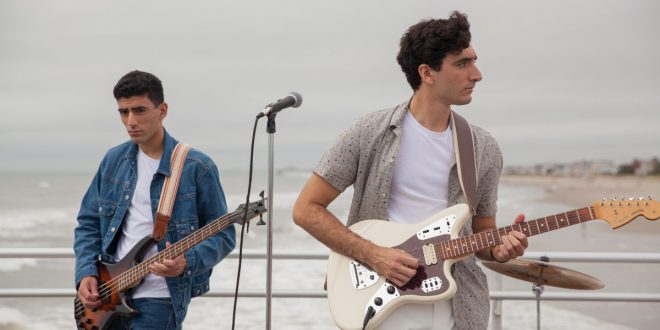 The NYC-based musician will release a new single, video this Friday. “Number 4” is from his self-titled debut album.

“I want to emphasize the vulnerability in sharing these songs…they might have an upbeat melody to them, but the lyrics still have this sense of coming of age, of nostalgia to them.” – Nouhi’s Nomad

New York City-based Iranian-American singer, songwriter and multi-instrumentalist, Nouhi’s Nomad has been on a musical journey since the age of three, when he picked up the violin. At age eight, he switched to piano, while studying Persian percussion, before discovering his true calling: singing. At twelve, he began studying classical voice, also picking up guitar and bass in college. With the March 21st release of his self-titled debut album, Nouhi’s Nomad has invited fans of indie rock along for the multi-cultural, nostalgia-fueled trip of their lives.

The next destination on Nouhi’s Nomad’s triptik is the new single and video release for “Number 4.” Released this Friday, April 16th, “Number 4” holds a special place in Nomad’s heart: “I wrote this song as an homage to early Vampire Weekend and about my childhood summer, two of my favorite things. It’s also one of the first songs I wrote and the one I spent the most time working on, and just listening to it gives me a feeling of satisfaction.”

Watch the video this Friday at https://www.youtube.com/watch?v=Ig76lGVSys0.

“This is a very intimate project, all of these songs represent landmarks in my life,” Nomad explains. “All of it stems from who I am. Ultimately, [Nouhi’s Nomad] is a way to get to know me as a person, as a musician and as a human being.”

ABOUT NOUHI’S NOMAD: Nouhi’s Nomad is a graduate of Fiorello H. LaGuardia High School of Music & Art and Performing Arts where he sang the title character of Orpheus in their production of Orpheus in the Underworld by Offenbach. In addition to his background in classical music, Persian music and contemporary rock are a few more of his influences—with all three shining through within his Persian percussion, hypnotic and unique melodies, as well as stripped-down guitar backings. Nomad’s self-titled album further expands on these influences, while still leaving much room for experimentation. Nomad is also a Semi-Finalist in the Atlanta Film Festival and a volunteer for the non-profit NIAC (National Iranian American Council).