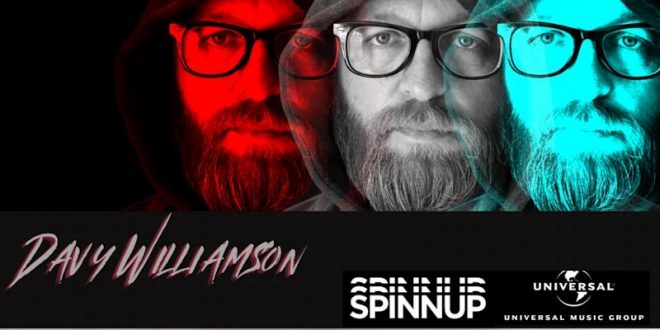 Founding member of Third Class Passenger and Ma-Shot-Pa is releasing “Down By The Fire” on March 12th. It includes the #1 iTunes hit “Thin Disguise.”

“Davy Williamson’s new single ‘Thin Disguise’ is about to send you into an all-out listening frenzy.” – MusicExistence.com

“Williamson’s vocal prowess, ripping guitar lines, and catchy hooks come together in a way that is reminiscent of modern rock titans” – OriginalRock.net

Wilmington, North Carolina’s Davy Williamson has enjoyed his share of success dating back nearly 25 years to his stints in popular regional bands like Third Class Passenger and Ma-Shot-Pa. In 2020, Williamson took his music to a whole new level with his debut solo single, “Thin Disguise.” That track reached international hit song status, by reaching #1 on the iTunes Rock Songs chart in South Africa. In early 2021, he was featured in an Alternative Press instagram story, as well as having received rave reviews for the single. Now, Davy is about to reach new heights with the release of his first solo EP.

On March 12th, 2021, Davy Williamson will release “Down By The Fire,” a collection of 8 songs written and performed by Davy, including the previously mentioned “Thin Disguise” and new single, “Cliche.” The EP was co-produced by Williamson and Shawn Adkins of Back-A-Round Records. Adkins and Steve Hardy handled mixing duties. Mastering was done by Andy Vandette. Pre-sale for “Down By The Fire” begins on February 27th.

ABOUT DAVY WILLIAMSON: Born in Plant City, Florida and raised in his hometown, Wilmington, North Carolina, Davy Williamson began his musical career in 1996 when he joined the Indy Rock band, Emilio 5. He left the group later that year. In 1998, he co-founded a Modern rock band, Third Class Passenger, in North Carolina. In 2003, the band recorded their debut unsigned album, Dislabelled, with recording and mixing engineer Steve Hardy. In 2004, he left Third Class Passenger and joined a Punk rock band, Ma-shot-pa, but left in 2006.

Most recently, he has been living and performing in the Virgin Islands, playing mostly as a solo act. He also plays as a duo act with artists like John Hodges (Smoking Okra) and Andy Easton (The Tin Roof) in Atlanta, Georgia. Recently Davy has been seen sharing the stage with the likes of better known artist such as Toryn Green of (Fuel), and Paul Phillips of (Puddle of Mudd).