Trey Wonder looks set again to stir up some controversy in the music scene as he drops a new single titled ‘Battle Midnight’ on February 1, 2021. The song is a further reiteration of Trey’s creativity and ingenuity as he drops an “edgy” song that will deliver a unique experience to lovers of alternative/punk rock music.

Otherwise known as Trey Hatcher, Trey Wonder founded Trey Wonder Productions, a record label through which he releases his projects, and has lived up to the billing of taking rock to a whole new level. Punk rock has evolved since its emergence in the mid-1970s, thanks to the contributions of several artists, producers, and record labels delivering content to meet the yearnings of punk enthusiasts. However, Trey Wonder looks poised to challenge the status as he continues to create thought-provoking and industry disruptive songs since the release of his debut album, Nice Fish. He is looking to continue in this tradition with the release of his much-anticipated single ‘Battle Midnight’ and its music video.

‘Battle Midnight’ is not particularly different from previous works that Trey has dropped in recent times. However, he is taking his controversial nature a notch higher as he seeks to continue in the move to put punk in its rightful position in the music industry.

The video to ‘Battle Midnight’ will also be released on YouTube on February 1, 2021, featuring captivating scenes and an amazing interpretation of the lyrics by the different characters. Trey aims to take his audience on a fantastic ride that cuts across different settings and eras, including the current COVID-19 pandemic.

‘Battle Midnight’ will definitely cause an uproar in the music industry, helping to increase Trey’s popularity as a singer and songwriter.
For more information about ‘Battle Midnight’ and other projects from Trey Wonder, please visit – https://treywonder.com. Trey also has a relatively strong presence across digital media and can be found on Spotify, Instagram, and YouTube. 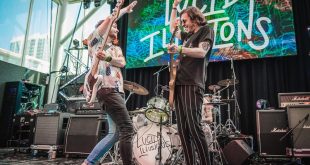