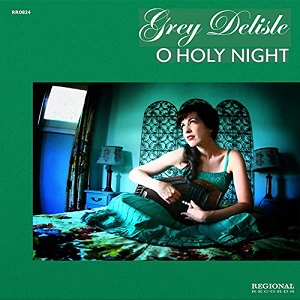 Exceedingly minimalistic and rural in spirit – yet not quite devoid of the polished tonality commonly associated with mainstream pop – there is nothing but purity to behold in the performance Grey DeLisle gives in her new single “O Holy Night” and its companion video. Released just in time for the holiday season’s incredible climax, DeLisle’s “O Holy Night” does not fail to make use of the singer’s fragility and decadence as a singer while still focusing on keeping anything even slightly unnecessary out of the equation entirely. It’s a delicate balance for sure, but not one that was too difficult for this singer/songwriter to strike.

The stylization of this song is what makes it immediately recognizable as we get into the guts of the melody, but I would also argue that DeLisle’s depth of emotionality is anything but ordinary (and serves as the biggest reason why you need to hear this track).

The tempo, the structure, even the puritanical presentation of “O Holy Night” are nothing new to me as a critic or a fan of Christmas music; what is fresh here is the weight of the vocal and the intensity it affords the narrative even without being much more than a playful whisper in some spots.

I’ve always been a sucker for a good Christmas song, but if you’re looking for something that is both exceptional in quality and design, Grey DeLisle’s “O Holy Night” is something that really hits the spot this December. Though she’s been in the business for more than two decades now, this singer/songwriter doesn’t sound like she’s playing past her professional expiration date at all (the exact opposite, honestly). She’s got so much in her heart left to harmonize with, and here she’s making it known that the seasonal soundtrack isn’t too intimidating a songbook for her to cover, either.

Previous Single Review: Neff Nuffsed “Stranger Things”
Next Interview: Dan Fenton of Voltagehawk discusses video for cover of Mariah Carey classic, “All I Want For Christmas Is You”