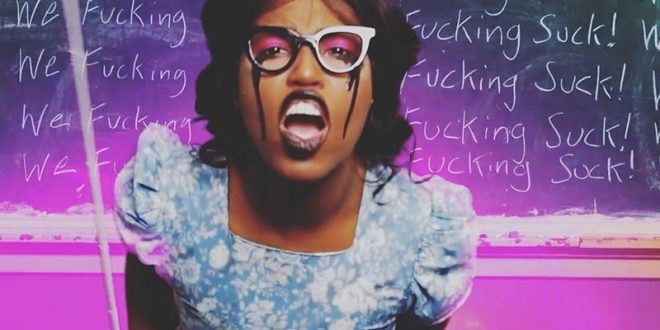 It’s 2020, and while America has never been fatter, the nation’s problems have never been quite as obvious and difficult to ignore by all measurements. People sleeping on the streets, the sick needlessly dying, the hungry withering away beneath the smog of a pollution-ridden environment; all for lack of sufficient funds in the richest country on earth. It’s a bleak scenario from all angles, but in Lesibu Grand’s “WFS,” it isn’t the death sentence some would have us believe it to be. Lesibu Grand throws up a middle finger at the media narrative of “getting back to normal” this November with her latest single and video, and for me, it’s a statement I couldn’t be happier for her to be making.

The music video for “WFS” reinforces the lyrical theme here brilliantly, and regardless of personal politics, its appeal seems to be geared towards those who are fed up period. The rebelliousness of the music itself rallies us to our feet only to witness an implied destruction of self and surroundings from Lesibu Grand that is both provocative and perfectly simplistic for the setting she’s been given. Balance is important, even in punk rock, and that’s partly why this release feels so complete and radio-ready despite its incredibly rough edges.

Fans of forward-thinking punk rock with a serious message to be shared among peoples of all backgrounds can’t beat what Lesibu Grand is putting down in her new single and video, and I don’t think I’m going to be the lone fan of its definitive moxie. “WFS” is an explosive song that thrashes about with a purpose, and while some might be under the delusion that this kind of material is becoming increasingly easy to come across in 2020, those who follow the underground and mainstream the same will recognize this for the diamond in the rough it really is.